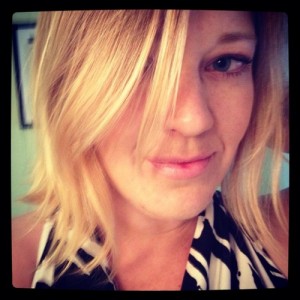 I have to admit the whole idea of writing thoughts that will be read on the Internet scares the bejesus out of me.

When Lindsay Bell first asked if I may be able to conjure up some words to be shared on Spin Sucks, the excitement and honor of being asked propelled me down the street, my dance-walking stylings garnering a fair share of bizarre looks in my neighborhood.

The project was not yet begun, and already the future accolades were making my head swell.

Then, as it always does, the reality set in.

I had 17 false starts. Nothing flowed.

So I forced it. Tried to shove this idea towards that, to make visible some of the eddies and currents of thought in my monkey mind. The product off all of this shoving was something almost, but not quite, completely unreadable. You could see it really wanted to make a point, that it had something it wanted to say, but the execution was subpar, to be kind.

I sent my first attempt at creation out to a variety of eyes. I picked some friends and some strangers, with a variety of aptitudes and abilities. I asked them all to please be brutal with the caveat that, being in sales, I could take it.

In Which I Solicit Customer Feedback

And brutal they were. Through their kindness and encouragement, I did not feel completely eviscerated, but knew I had a long way to go. Of the seven readers, six told me with enough work, my piece could be made functional.

But that one, that one really shook things up.

Although it worked him up much more than it did me, he was incredibly honest and told me my piece was unreadable. And yes Brian Meeks, even though I thanked you, I did cry. Just a little wee bit. Not even enough to make my mascara run. I had a smile on my face though, because I asked you to be brutally honest, and you were. I treasure nothing more than honesty, and I knew I had it.

Does this mean the other responders were incorrect? Not at all. Does it mean they were just telling me what I wanted to hear? Not one bit. Does it mean their feedback had no value? Not in the least.

Now I was faced with a choice – do I continue on with my first piece, retool it with the help of the six until it makes something approximating my point, and post it? Or do I follow the advice of the one and EXTERMINATE?

In Which I Respond to Customer Feedback

I tried to take it all in – the good, the bad, the ugly (although the bad, the worse, and the gut wrenching may be more accurate). I decided to scrap my first post and write, just to see what happened. Then, some sort of magic started.

A few of the 17 non-starters I had were focused around soliciting customer feedback, and what you do with that knowledge. I have always believed you earn the right to ask for honesty from your customers by being honest with them. Brian allows me free access to edit his writing, listens thoughtfully to my feedback, and takes what he estimates to be 85 percent of my suggestions.

I do love reading his words and like to pile on the praise, but I have earned the right to have my feedback considered through being very upfront when I believe he is off-track. Sometimes my comments are as simple and as harsh as “you can do better.” With this honesty in my dealings with him, I had earned the right for him to be honest with me in kind.

This is exactly the relationship I strive for with my customers. When I cannot fulfill their request, I tell them “no.” I do try and give them some sort of rationale, but I do not say “maybe” when there is no chance.

In return, I provide them with the opportunity to be open with me. When I ask for honest customer feedback, I receive it. Does it hurt sometimes? Heck yes. But does it provide me with opportunities to grow and learn and change? Absolutely.

So I leave you with this – how do you earn the right to ask for customer feedback? What do you do with it when you receive it? Do you ignore the Brians and focus on the more positive responses? Or do you seek out those customers with real issues and work to address their points of pain?

Graduating with her bachelor’s of education, Rebecca Todd knew the classroom just wasn’t for her. Rebecca’s passion for adventure and learning brought her to the realm of educational publishing, and she works as a publisher’s representative for Ivey Publishing. When not travelling the globe connecting with her customers and authors, she enjoys hot yoga, her dogs, and thinking about working on her Victorian home. You can find her in the comments here on Spin Sucks and on LinkedIn.