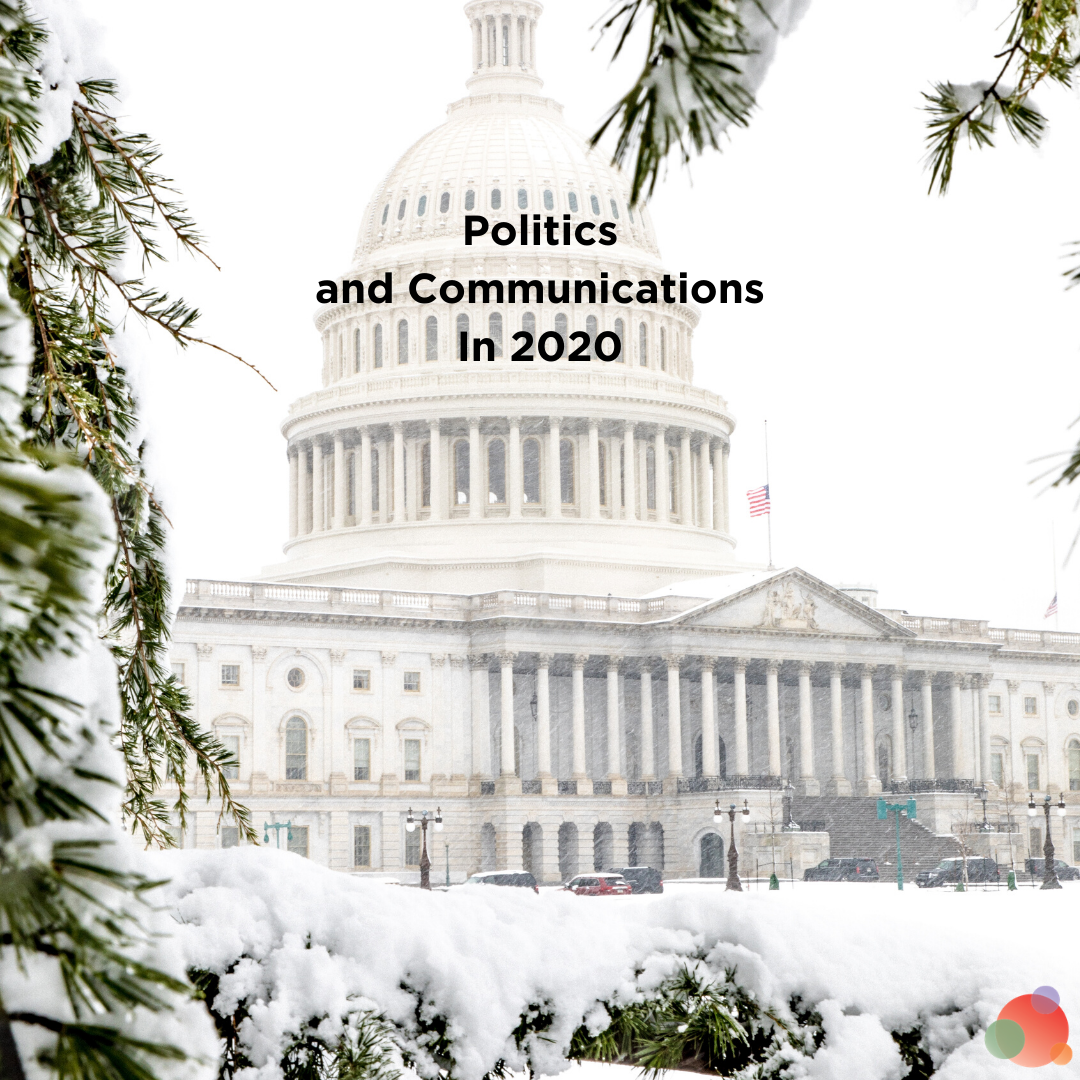 We have another trend for you this week from the Spin Sucks community.

And this one is perhaps more daunting than all of those Terminator movies.

I’m talking politics. In our trends piece from a few weeks ago, one of the most mentioned issues was what role PR is going to play in the upcoming election.

One statistic from that article has really stuck in my mind:

Of the top 20 most viewed news stories on Facebook about the 2016 election, the “fake news” stories received 8.7 million engagements, whereas the mainstream news only received 7.3.

What’s a communicator to do?

Between the impeachment trial and the forthcoming election, there is a lot for a communicator to worry about.

Can we get the attention of journalists?

How are we supposed to talk about it, if at all?

How do we prevent the spread of fake news?

And how do we counsel our clients and/or executives during what is sure to be a bit of a crazy year?

After the last presidential election, I broke my cardinal rule and wrote about it on Spin Sucks.

I—along with many Americans—was shocked by the results.

I was scared about the future—what it meant for me personally and how it might change our industry.

At the time, a colleague and friend from Switzerland emailed to see how things were in the U.S. I was very raw and vulnerable in my answer.

Her response was pretty much:

Hey, we all have that crazy uncle we have to deal with.

It was exactly what I needed to hear at the time.

Not much has changed in how I feel about the human being who occupies our White House.

Politics aside, he’s a very bad man and it’s very challenging to come to grips with that, let alone try to explain to a six-year-old why he’s doing what he’s doing, other than, “I just don’t know. It’s not OK.”

Fake News and Its Effect On Our Industry

On the business front, we’ve certainly had our share of ups and downs in the last four years.

We’ve had to deal with fake news from all corners of the web.

Our clients and/or executives have had to figure out how to stand up for what they believe in without alienating customers.

And there have been plenty of executives who have tried to do that and ended up stepping in it because there is no precedent.

Our jobs have become even more crisis communicator than anything else—and this year won’t be any better.

Back to that article I wrote nearly four years ago. This is how I ended it:

As communicators, we have a huge opportunity in front of us. We mold messages. Protect reputations. And work one-on-one and one-on-many to do the very best for our organizations and for our industry. We are persuasive.

Don’t underestimate your role in being part of the America you want. Go to work today—and for the next four years—ready to provide more value to more people than you did the day before.

Now that we’re in year four of four, let’s look at the current landscape, and what the coming political storm means for communicators in 2020.

First and foremost, do we even talk about it? And if so, when? And to who?

Whether or not politics should be discussed in a professional setting is a polarizing issue.

Most of us were taught that there are two things you don’t talk about in public—politics and religion.

This is because those are two things you will never change a person’s mind on.

Certainly not in a dinner debate or with a post on Facebook or in a news conference about your business.

But we live in a very different environment right now.

There are issues beyond politics that we should take a stance on, if we believe they are wrong.

The very reasons our country exists.

People have become very comfortable talking about it all, which is great…if you agree with them.

In our weekly group coaching calls for Agency Jumpstart, you can be certain three things will come up right now:

When a new client enters those calls, it always makes me a little nervous.

I can control some of it, but not all of it.

So I try to give people a heads up. I may be being overly sensitive to it, but I’d rather err on that side than not.

Which is how we should counsel our clients and/or executives, too.

As we traverse this new ground, I thought it’d be interesting to see what the queen of etiquette has to say about the matter.

I was surprised by how open-minded Emily Post is on the topic.

Here’s what she had to say:

Some tips for a successful conversation [about politics]: know your goal. Think about the purpose of the conversation, and whether you should even be having it. Are you seeking information? Advocating a point-of-view in the hope of changing someone else’s mind? Venting frustration? Consider how receptive your audience will be to your purpose. Do your homework. While there is always more to learn, at least know some basics about a candidate or issue before volunteering an opinion.

This is why I’ll almost never argue with my husband about politics.

He lives and breathes it, and I’ll never be educated as he is about these things.

And it’s great advice from a PR perspective, too.

Don’t spread something you don’t know to be true.

If you’re advising someone on this topic, you want to go back to the basics and be very strategic before you make decisions.

Who is your audience? What are your brand personas?

If you are not a fan of Justin Trudeau’s beard and want to talk about it, would you do that at the Beard Lover’s Guild?

If your customers were members of the Beard Lover’s Guild, is it a good opportunity for you to make fun of it?

Keep that conversation for dinner with your friends who agree with you.

For the record, in the words of Ke$ha, I like your beard.

It’s a silly example, of course, but you see my point.

The Risks vs. Opportunities

If you love Trump, but your customers are mostly people of color or immigrants, you’d best check yourself.

And the same goes on the opposite spectrum.

If you can’t stand him and most of your customers are staunch—and vocal—supporters, it’s far too risky to take a stance professionally.

It may also require you to reexamine who you do business with, but that’s a different topic for a different day.

You need to make the judgment for yourself.

Your workplace, your social group, and your customers are unique.

You’re in the best position to decide whether or not you can let your political colors fly.

You can be reasonably sure of the kind of response you get when you’re engaged in a personal conversation.

But as communicators, we spend a lot of time developing content and campaigns for people who don’t know us… and that’s a whole other ball game.

Now that we’re more or less ready to chat about our paralyzing fears for the future of the planet around the water cooler, we need to address the big, fat, annoying, disruptive, and completely irrational elephant in the room: social media and fake news.

Where to even begin?

I guess it has to be the fact that there’s more of it coming, and one of the social media juggernauts doesn’t seem to be that interested in doing anything about it.

Unlike Twitter and Google, Facebook has made the statement that they’re not going to prevent politicians from targeting individuals with ads, and they’re not going to, in any way, attempt to verify that the information shared in those ads is factual.

It’s going to be a long year.

But, to harken back to myself four years ago, we DO have the power to change things.

In our recent trends article, commenter Mike Vannest posed what may be the question for communicators to answer this year:

How will PR practitioners’ social tactics change in the face of the political campaigns?

The biggest challenge we face this year is all of the noise.

Between the impeachment trial and the election—and sprinkle in a coronavirus—it becomes very, very noisy.

Our social tactics don’t necessarily change. We do have to keep doing business as usual, after all.

But we do need to be attuned to what’s going on at a national and global level.

And, because Facebook seems to stand alone in their refusal to limit misinformation, it’s going to be interesting to see if the way people use it is going to change.

A recent article from Hootsuite lays out some interesting stats: about two and a half billion individuals use Facebook monthly, and the user base is still growing.

Interestingly enough, though, the growth rate of advertising spending on the platform has dropped.

There are a few reasons for this: the aforementioned noise is one reason—people are fed up with all of the political commentary and mud slinging that happens on Facebook.

But more, Facebook advertising used to be one of the most effective ways to reach new audiences.

We had to stop our social media advertising entirely last fall.

The cost-benefit ratio got too small to keep it going.

So, while the general thinking on Facebook is negative, that’s not what’s causing a downslide in advertising.

We’re just all tired of it all—and that’s something to consider as you traverse this election year.

Unless, of course, you have a client or executive who wants to go balls to the wall on one side or the other.

Because those cases are few and far between, the best thing we can do this year is change the way we use the tools, as they relate to what’s going on around us.

Do Politics Have a Place in Communications?

So what do you think?

What place does politics have in your communications programs this year?

How will PR practitioners’ social tactics change in the face of the political campaigns?

Or, if you prefer something a little more private, come hang out with us in the Spin Sucks community.

Photo by Caleb Fisher on Unsplash