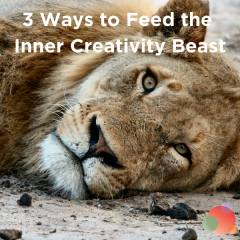 Growing up in the traditional PR firm world, I learned there were (at the time) two types of agencies: public relations and advertising.

At the ad agencies were the creative guys. They were the ones who had the colorful markers and the cool computers and the fancy software.

They got to wear jeans and arrive late to work. And they got to have three hour lunches, sometimes fueled by drinks.

After all, that all enhanced the creative spirit, just as we discussed earlier this week.

My perception of my ad agency brothers was exactly what I experienced at my second job.

When I later joined an ad agency to start their PR department, I learned I wasn’t so far off.

It was there I also learned PR professionals can—and absolutely, positively should—be creative.

Sure, we’d had the really creative campaigns when I worked at the PR firm (hello Ocean Spray art tour and celebrity chefs cooking catfish), but the way we went about getting and selling those ideas wasn’t a standardized process.

It was usually someone who had an inkling of an idea in a brainstorm and it took off from there.

Where Are PR Creativity Levels?

Every year, the Holmes Report conducts a study of PR professionals to determine whether or not the industry is creative enough to successfully sway marketing budgets and develop game-changing ideas on a consistent basis.

It revealed more than 50 percent felt PR creativity levels were “ordinary or worse” but that PR firms were bringing on creative directors to help fuel creativity and win big accounts.

Ug! Stab in the heart! What is wrong with us? Why aren’t we seen as creative as the boys with the colorful markers and cool jeans?

Why is there a perception of us as clacking women in high heels, short skirts, and smart phone-carrying snobs? And for men, overly stuffy in suit and tie and way too serious for a creative endeavor?

I’m cool and creative! I have lots of colorful markers, spend more on jeans than on suits (heck, I can’t remember the last time I bought a suit), and carry around my MacBook like it’s a baby.

In fact, most in the industry are like me, but the creativity issue remains.

There are three things we need to focus on if we want to win a role in creativity:

Let’s look at all three (and, by all means, buy yourself some colorful markers!).

This one is easy.

If you’re curious and have a lifelong quest to constantly be learning, you have accomplished the first step in being creative.

Bill Dorman commented here the other day that he was at his creative best when he was blogging every day.

That’s because he was practicing his art every, single day. And he paid attention to the world around him for inspiration.

It’s not that creative people have to drink themselves to death like Ernest Hemingway nor do they have to trip on heroin to come up with the best ideas.

Most are seemingly creative because they look and learn outside of their industry, which helps them develop ideas for their work.

Blogging is such a great example of this (thank you, Bill).

When you blog every day, you are constantly looking for content ideas, in everything you do.

This is an interesting one and goes back to how we began this discussion.

You cannot talk to an art director or copywriter until you’ve completed one so they can think about the problem within the constraints.

Think about Michelangelo. What if he’d been told to paint whatever he wanted in the Sistine Chapel? He likely wouldn’t have come up with the masterpiece because the field was too open.

Have you ever been asked to write a guest blog post for someone without constraints?

But when they give you two or three topics to consider—and a deadline—the ideas begin to flow.

When I went to work for the ad agency, I quickly learned it was full of conflict.

You have the suits, the jeans, and the planners.

Those three groups of people are all very different personality types, which leads to lots of debates (and sometimes downright arguments) and lots of hot heads, but it’s also where some of the best ideas come from.

In PR firms, all of the people are the same and we all think the same so it’s hard to have that conflict.

Think about where you work.

Are there other personality types who are willing to debate other merits of your idea?

Find those people, throw them the idea, and open your mind to other possibilities.

When you begin to disagree is where the magic happens.

It’s not always pleasant and, if you’re like me, your cheeks may burn a few times a week, but it’s worth the pain in the end.

How Will You Feed Your Beast?

Because of my career experience, I never really considered myself a creative person.

I’m much more analytical and love numbers too much.

But I’m also insanely curious and I work very, very hard on my craft (see me writing here every day as example).

You don’t have to write every day to be creative. Heck, you don’t even have to write. But you do have to hone a craft—your craft.

My friend Whitney Danhauer told me she doesn’t make New Year’s resolutions, but she chooses one creative thing she’s going to learn and hone every year. This year, it’s drawing faces.

Likewise, I am working on still oil paintings. MAJOR work in progress, but doing that kind of stuff fuels your creativity.

What about you? How do you fuel your creativity? What would you like to do more of? The comments are yours…

Photo by joel herzog on Unsplash