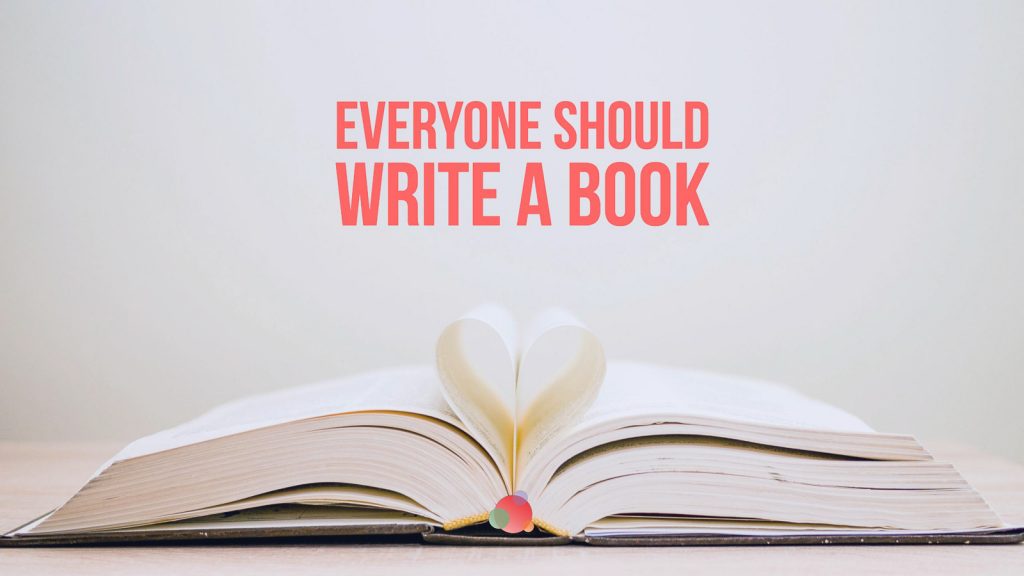 There are reasons to write a book. And everyone should.

Even if you don’t want to.

This post isn’t an altruistic, shiny-happy protestation that everyone has a story to tell (even though they do).

It’s a pragmatic appeal. Everyone should write a book.

Before we get to that, let’s examine the other side of the argument.

Everyone Has a Book Inside Them

Everyone has a book inside them, which is exactly where it should, I think, in most cases, remain.

Ryan Holiday, writer and media strategist, published an article called, “Not Everyone Should Write a Book.”

If the internet is responsible for one recent, disturbing trend it’s this: The idea that everyone can and should write a book. Entrepreneurs should write books. YouTube stars should write books. Quit your job and become a Kindle author. There’s even one service that specializes in helping enterprising pastors turn their sermons into books, “without having to leave the pulpit.”

It seems inspiring and democratizing, but the truth is that not only has this bit of self-help internet feel-goodery sucked up thousands of hours of the time of otherwise productive people, it has flooded the world with crappy books.

Which is why I have to come out and say it: You should probably not write a book. And you shouldn’t pay someone to write one for you either.

Bad Reasons to Write a Book

Tucker Max wrote a post entitled, “Why You Should NOT Write A Book.”

Pretty ironic for a guy who also co-founded Book In A Box, a service to help you write your book.

According to people like Mr. Max, there are some terrible reasons to write books.

These may be byproducts of writing a book (for some exceptional writers), but they shouldn’t be the reason behind it.

There are so many GREAT reasons to record and share your ideas with the world through a book, I wish more people did that (in fact, I believe so much in books that I started a company to help people easily turn their ideas into books).

Still, motivations aside, I would argue (I am, in fact, arguing) everyone should write a book.

Reasons to Write a Book: The Unrealized Dream

So, why should everyone write a book?

The book you actually write is better than the one you dream of writing. Most people have a dream of writing a book but never realize it. Not because they can’t or don’t know how, but because they’re afraid. Because an unrealized dream is safer than an action that could fail.

While I am a big fan of Mr. Goins and agree that this is A reason for a particular person to write a book, I disagree it applies to everyone.

Some people just don’t want to write a book.

They aren’t aware of, or care about, any lack of knowledge or ability to write said book.

As far as they know, there isn’t an unrealized dream they need to pay homage to.

But I’m still sticking to my guns.

Everyone needs to write a book.

Whether they want to or not.

Why do you exercise?

Or why should you, if you don’t?

Because it’s good for you.

Just like exercise, and eating fruits and vegetables, your body and mind need activity and fuel to keep running smoothly.

Writing is a form of exercise and just like your body, your mind needs it to perform.

You may feel you aren’t good at it.

But someway, somehow, it needs to get done.

And just like anything else, if you don’t have a plan and a goal, the activities themselves aren’t going to be effective.

Sure, some exercise is better than none.

But an exercise regiment, a plan, will get you where you want to go.

In our profession, a content plan provides the foundation for our PR and communication endeavors.

But putting one together isn’t easy.

An outline is a lot of work.

But it’s the process that’s important.

Your outline is a road map, Weiland explains.

A mile-high view of the big picture.

It helps you develop themes, discover characters, and organize your scenes.

Identifying those components before you get down to writing not only helps you focus on the story you’re trying to tell, it likely means you’ll have much less editing and rewriting to do later on.

Sound useful? Something you could apply to your strategic planning?

Who is going to read your book?

Writing it forces us to identify an audience.

We can’t write, or plan, for every reader.

But, we can be inviting.

“An opening line should invite the reader to begin the story,” said Stephen King in an interview with The Atlantic. “It should say: Listen. Come in here. You want to know about this.”

Every time I write something new, I think long and hard about that opening line, about how I need to invite my audience in and give them a reason to read.

Teaching that is one thing.

We don’t always realize it at first, but as we write and find our voice, we learn more about who we are.

We’ve talked so much about the reader, but you can’t forget that the opening line is important to the writer, too. To the person who’s actually boots-on-the-ground. Because it’s not just the reader’s way in, it’s the writer’s way in also, and you’ve got to find a doorway that fits us both. I think that’s why my books tend to begin as first sentences—I’ll write that opening sentence first, and when I get it right I’ll start to think I really have something.

Whether you’re developing a how-to book, a work of fiction, or a memoir, writing (and outlining) puts form to our thoughts.

It forces us to think about what we believe, why, how we want to express those ideas to our audience, and how we’re going to get them interested in them in the first place.

Reasons to Write a Book: Because It’s Hard

I may not agree with Goins’ “unrealized dream” rationale for writing, but I fully support and embrace his theory that “everyone should do something hard at some point.”

Writing a book, putting together an outline, putting yourself out there. It’s hard.

But it’s important to push through that hesitation. The insecurity.

It can be a humbling experience, but the resulting humility and self-awareness are defining characteristics.

The most important thing I’ve learned in both my “work” writing and what I would consider my “creative” writing, is that I can’t do it alone.

Every good writer needs an editor.

So consider this a challenge.

Even though NaNoWriMo is well underway, start thinking about that book you want to write.

Who would want to read it, and why?

Maybe the PR Dream Team can help you get started.

You can’t go wrong if you try.

You may never finish that book, or publish it.

What happens if you don’t try to write that book?