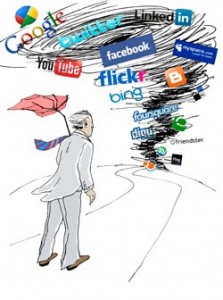 One would think, in 2013, anyone who does social media professionally has this whole social web figured out. Particularly when one works for a big brand that has hundreds of thousands of customers who know how to use Facebook and Twitter.

But I guess we know what happens when one assumes.

To prove the “assume” point, let’s take Applebee’s as case in point. The Mercury News sums up the situation quite nicely:

“A waitress at a St. Louis Applebee’s lost her job for posting online the receipt upon which a pastor had declined to leave a tip, with a snarky note saying she gave God 10 percent.

“After her dinner on Jan. 25, Pastor Alois Bell crossed out the automatic 18 percent tip charged for parties of more than eight. “I give God 10% why do you get 18,” she wrote above her signature.

“Employee Chelsea Welch — a colleague of the stiffed server — took a picture of the receipt and uploaded it to the online site Reddit. She subsequently lost her job, an Applebee’s spokesman confirmed to TheSmokingGun.com, for violating a customer’s privacy.” 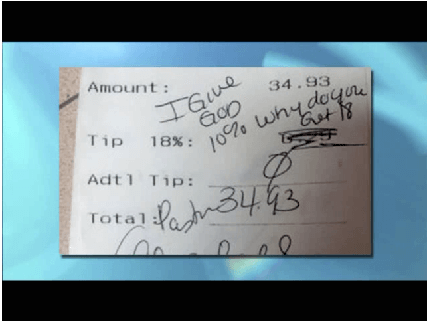 Alright. So the friend of the stiffed waitress gets fired for posting a copy of the receipt on Reddit. And it’s pretty crappy someone won’t leave a tip (though the pastor claims she left cash, which has not been confirmed), especially for a large party and because she disagrees with the percentage, not because the service was horrendous.

But that’s not the story. The story isn’t even the rage people felt as they took to the web to demand the waitress get her job back, creating “Rehire Chelsea Welch” groups on Facebook.

The story, the marvelous train wreck of a story, is in how Applebee’s responded.

Around 3 p.m. on Friday, Applebee’s posted this on their Facebook page: 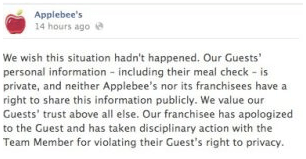 I don’t disagree the waitress should have been fired. If it’s against their policy and violates the guest’s right to privacy, so be it. That’s a fireable offense.

But then, guess what? This (captured by IfYouCantAffordtoTip) is also a fireable offense as it violates the guest’s right to privacy because it shows his name at the bottom: 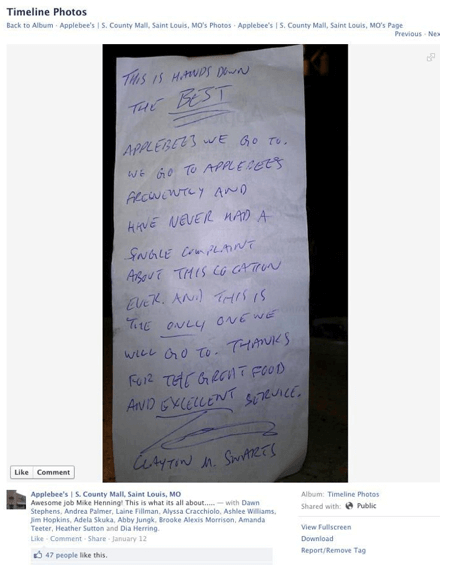 Around midnight on Friday, the issue began to really take steam and people began commenting back about the hypocrisy and double standard.

But here’s where is gets good: At 3 a.m. (yes, in the middle of the night), whomever controls the Applebee’s Facebook and Twitter streams began commenting to people with a clearly pre-approved message that tells their side of the story.

However, it was posted as a comment on the original status update on their page and, with more than 17,000 comments on there, it quickly got lost in the shuffle (note to anyone managing the social networks: If you have to provide a statement, do it as a new status update).

It, of course, was impossible to find after five minutes because, apparently, people sit up all night to post on the social networks. Side note: Do people do this while they’re drinking? After they get home from the bars? If they have insomnia?

Because the statement was impossible to find, the person handling the account began to tag the people who were commenting and copying and pasting the message explaining the situation.

It’s the Middle of the Night

Now, mind you, this is in the middle of the night so now people are calling them out for copying and pasting. Have a look: 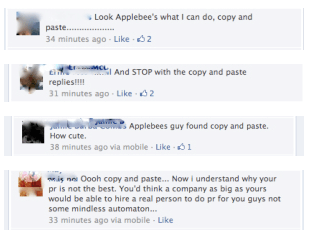 I won’t detail the rest of the story (you can see it, images and all, in this photo essay), but Applebee’s began to argue with people around 4 a.m. And by 5 a.m. on Saturday morning, there were thousands of comments.

As of this writing, there are nearly 33,000 comments combined on the first update that explains why the waitress that was fired and the second update that pretty much says the same thing (but uses “regrettable” about a thousand times in the one paragraph). People are still commenting and, now, there is no response from the company.

The company has a widget on their home page called, “What’s the Buzz,” that updates instantly with tweets from customers: 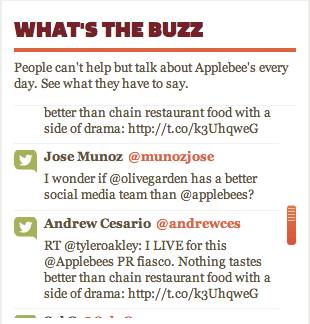 Some people are saying comments have been deleted, but it looks like they hid them and other posts from their stream. It does, however, look like they’ve deleted the Applebee’s comments from Friday night/Saturday morning.

What if this Happens to You?

If this had happened three years ago, I would have approached this blog post differently. Today, I look at things with a different perspective and I want to try to put myself in their shoes.

First of all, I would hate to be Applebee’s PR firm right now. My guess is – based on the middle of the night comments and the tagging and the arguing and the copying and pasting – the person who manages the page did all this on their own.

I would be furious with them if they were one of our clients.

That said, this could have happened to any one of us. We have clients who I separate myself from the day-to-day for the sole purpose of being able to think about the things that could happen to them.

You can’t prevent it, but you can manage it. If you missed Mike Mullet’s post here last week, he talks about how you never hear about a well-managed issue.

He’s right. If this had been handled differently, it would have been a well-managed issue no one heard about instead of a crisis.

Tips for Managing an Issue

If you take these six (okay, five) things to heart and implement them, the issue never becomes a crisis.

The last thing I’ll say before I turn it over to you for your thoughts is this…it turns out there is a new ambulance chaser in town: