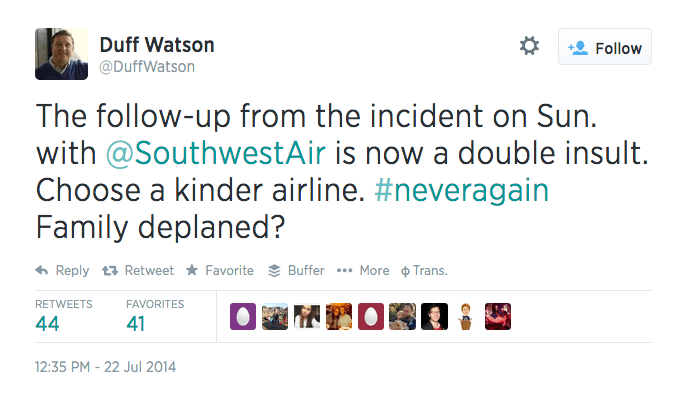 Southwest Airlines has been in the news for customer tweets before.

And chances are good that, by now, you may have heard about the latest Southwest/Twitter dustup.

This time, a dad was nearly kicked off his Southwest Airlines flight for tweeting about a Southwest employee.

If you missed the story, here’s a refresher: Last month, Duff Watson was getting ready to board a flight from Denver to the Twin Cities with his two kids.

As an “A list” Southwest Airlines passenger, he’s used to priority boarding, but in this case, the gate agent said his daughters weren’t entitled to the privilege. He would have to wait.

Watson didn’t like the gate agent’s response, and, after asking for the agent’s last name (and failing to get it), he told her he’d be tweeting about her.

Then he tweeted something along the lines of:

There are differing reports on the exact content of the tweet, because shortly after boarding, Watson’s name was announced on the plane, and he was asked to disembark.

He and his two children were then reportedly confronted by the same gate agent and told that his tweet was a safety threat, and unless he deleted it, he wouldn’t be allowed back on the plane.

Watson complied and was able to re-board the plane, but afterward, he went very public with his complaints.

The story was covered widely.

Watson appeared on Good Morning America—and in the segment, his adorable daughter talked about how, when they were pulled off the plane, she’d feared her dad would be arrested.

In the ensuing controversy, Southwest had this to say about the incident, including:

Southwest Airlines appreciates and is active in social media, and it is not our intent to stifle customer feedback. Social media is a very valuable avenue for engaging with our customers. The customer was briefly removed from flight #2347 from Denver to Minneapolis/St. Paul to resolve the conversation outside of the aircraft and away from the other passengers. Our decision was not based solely on a customer’s tweet. Following a successful resolution, the customer and his family were able to continue on the flight to Minneapolis. We are thoroughly investigating the situation. We have reached out to the customer and offered vouchers as a gesture of goodwill.

This is Not What We Mean by Social Listening

We advocate for social listening, for taking the time to find out what your customers are saying about you on social media.

But this is not the way it’s done. The idea is to use social listening to understand your customers better and to better serve them, not to use what you find on social to lord your FAA-granted power over them.

Deleting: When Will We Ever learn?

I thought Danielle Ali put it very well in a recent blog post on the Blue Kite Marketing blog on the topic of a breastfeeding-related social media crisis: “You can’t delete your way out of a mess.”

While it’s true that not every airline (and, in this case, airline employee) has skin as thick as Spirit Airlines, why on earth would anyone think deleting would solve the problem?

I’ll admit it’s hard to know exactly what happened that day, as we only have Watson’s version of the story. The Southwest response leaves a lot of unanswered questions.

Was Watson causing a scene once he got on the plane? Was there actually something threatening in the tweet? If either of those situations were different than the story we’re hearing, it does change things.

I’ll still say this: It’s hard to imagine a scenario in which demanding a tweet be deleted was the right move.

I could go on … but I want to hear from you. What do you think about how Southwest handled this rogue tweet?