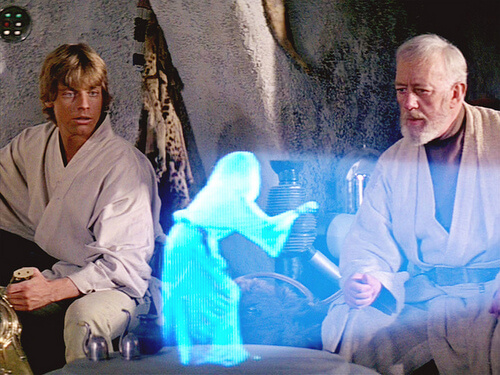 A few weeks ago, I introduced holoportation from Microsoft to you in Gin and Topics (see the #4 video).

It might very well be the coolest thing I have ever seen.

Remember in Star Wars—the original one from the 80s—when Princess Leia delivered a message to Obi Wan Kenobi via hologram?

That’s what we’re talking about here, but far more advanced and in actual, real-life!

Imagine being able to attend Thanksgiving dinner with your family who lives 2,000 miles away, but from the comfort of you own home.

No holiday airport mad rush. No amateur travelers. No one asking TSA if they really have to take their shoes off. No one trying to take a full-sized bottle of shampoo in their carry-on and then arguing when it’s taken away.

In fact, if you want to leave before Uncle Rich gets drunk and starts talking politics, all you have to do is turn off your headset.

No guilty looks from mom. No Aunt Theresa trying to shove more food down your throat.

(Of course, that also means no leftovers, but there have to be some sacrifices in the name of convenience.)

The technology is ready and it’s becoming quickly accessible to companies, large and small.

The Washington Post recently reported that Pierre Nanterme, the CEO of Accenture, went to a studio in Paris and had his body beamed via hologram to Chicago for an employee town hall meeting.

No seven hour flight. No jet lag. No being gone for a week or more.

But he wasn’t the only hologram attendee:

At the same time, the professional services firm’s human resources chief, Ellyn Shook, was beamed in from New York, and the resulting three-dimensional “holograms” of the two executives chatted with each other about things like the company’s new performance reviews and recent acquisitions, while answering questions from the audience.

The company has built seven studios around the globe to allow for this kind of technology, which means it’s not truly accessible to every-sized company. Yet.

But imagine the possibilities.

Nanterme’s holograms are not a first in the business world—former Cisco CEO John Chambers talked with holograms of two executives onstage at an event in India a few years ago, for instance. In the entertainment industry, the late rapper Tupac Shakur was virtually brought back to life at the Coachella Valley Music and Arts Festival in 2012 using technology from a company called Musion, which also played a role in a hologram of Hugh Jackman doing a news conference for the film “Chappie” last year. Thanks to the technology, the physicist Stephen Hawking made a virtual appearance on the Sydney Opera House stage last year.

Not even celebrities are attending their own newsers in actual person.

This is very, very cool.

What Does It Mean to the PR Industry?

But what does it mean for the communications industry?

(Are you with me on this yet? It has HUGE implications!)

Remember in the late 90s and early 00s (sorry for those of you who are too young to remember this…I’m old) when we would host editors at media events?

(This is also where I taught a certain up-and-coming celebrity chef, who shall remain nameless, that you don’t have to buy clarified butter.)

Now imagine, if you will, you host the same kind of event, but the food editors don’t have to leave their offices.

There is no expense on their part. They aren’t gone for four days. They can still be at home for dinner with their families. And they can attend your event.

All it takes is a special headset (such as Oculus Rift) and a computer.

Or, let’s say you couldn’t attend Social Media Marketing World (which just ended, and I wasn’t there) or Content Marketing World or MarketingProfs B2B Summit because of a conflict right in the middle of the conference.

Sure, they have recordings you can watch from the comfort of your desk (or couch or bed or bike or wherever suits your fancy), but what if you could attend “in person”?

Or, what if you had a conflict—like I did with SMMW this week—and couldn’t speak at the event?

This technology would allow you to beam right in, stand on stage, and speak to the audience as if you were there.

When It Becomes Sophisticated, Watch Out!

I imagine, in the beginning—especially if lots of the attendees are holograms—that it’s a bit like people being beamed in via video conference and the computer is set up on a robot so it can move from room to room (or telepresence robots, as they’re called).

(You might have seen this in The Good Wife. And, when they got annoyed with the person, they put a piece of paper over the screen and let her try to see around that.)

It’s not super sophisticated yet, but it will become so as the technology gets better.

And, as the technology gets better, it will become more and more accessible.

Of course, nothing ever will beat the in-person experience, but we sure are getting good at nearly replicating it.