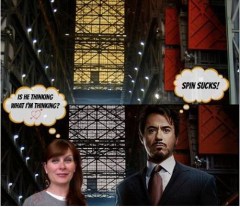 On February 18, we opened the application process to become a Spin Sucks brand ambassador for the book launch.

We narrowed it down to 160 (which included my team) of regular Spin Sucks contributors, commenters, and readers. We also included people we didn’t yet know, but wanted to get to know through the process.

They were asked to do three things:

We created a private Facebook group and invited everyone to join us there. To say that was a brilliant idea is putting it mildly.

It became the destination on Facebook for a good six weeks (and completely overwhelming for me to manage).

Friendships were formed, I was made fun of pretty consistently (see above photo), and we solved some world problems.

The plan included our brand ambassadors and…

Well, we did not make the New York Times bestseller list.

I’m disappointed because we did everything exactly right.

The plan was carefully crafted and executed and the brand ambassadors went above and beyond.

Most importantly, we were the #2 public relations book on Amazon for a week (and, as of this writing, are number six) AND the publisher (Pearson) is very happy with the results.

What’s disappointing (beyond not reaching our ultimate goal) is you can see that less than half of the brand ambassadors participated.

There have been a few who have emailed me privately to say they’re still planning on doing something so those people are forgiven.

But there were a good 50-60 people who did nothing except get a copy of the book for free.

I’m not sure how we could have avoided that, but because I just wrote a book called Spin Sucks and this blog champions ethics, I would have appreciated those people stepping aside to give their slot to someone who was on the alternate list of 672 people (and they could have kept their copy of the book!).

We also didn’t do earned media so well.

We preach to our clients that they need to start six months in advance of big events like this, but we started 30 days out.

So, while we’ll see some really good results in the coming months, it wasn’t in time to choreograph those stories during launch week.

But, the biggest lesson is you have to sell books in bulk to make The List.

Even if every brand ambassador had participated, they each would have had to sell 100 books. That’s not realistic.

I did offer to waive my speaking fee to two organizations who bought 300 books  during launch week, but the offer was made on March 30, which wasn’t enough time for anyone to get approval for that kind of buy.

If you’re going to do something similar, I recommend executing an entire plan around marketing to organizations that host events a good three months in advance.

Other than those three things, I do believe the plan was perfect and the execution was flawless.

Mobilizing the brand ambassadors was the most fun part of this launch.

Without them and without my cracker jack team, I wouldn’t have been excited nor would we have sold as many books as we did.

Those who wrote blog posts follow (I should have alphabetized these):

The work they all did was incredible. I’m flabbergasted at how much time they each spent in spreading the word and trying to help me reach the goal.

It is a great case study in how organizations can mobilize their loyal customers to build awareness and grow.

How You Can Help

So, if you haven’t already bought a copy, do it!

Read it, write an honest review, and recommend it to others.

I’ll be forever indebted and you can always call on me to help you with your initiatives.

Thank you, from the very deepest part of my heart, to all of the brand ambassadors who participated.