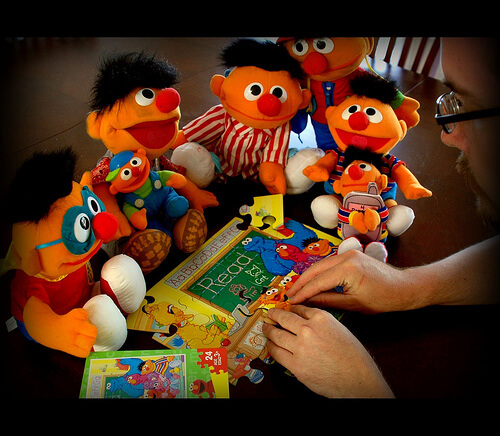 During the month of September, we are taking a hard look at visual marketing.

There’s a place where the visuals work with creative energy and outstanding writing to create what, I believe, is one of the best content marketing programs on the planet.

From the first episode of Sesame Street, and probably earlier, children’s television has sought to teach, educate, entertain, and inform children.

What Can We Learn about Visual Marketing from Big Bird?

When you research the program, it’s listed under several sub-genres for children’s television, including animation, sketch comedy, education, and puppet shows, according to its Wikipedia page.

It falls in line with something about content I’ve preached for years—variety.

Some of us are readers and some are viewers or listeners.

We all react to visual approaches, which can help draw us in to a learning environment.

Along these lines, my nieces, five-year-old twins and a four-year-old, are into television a little too much.

What amazes me though is how, at the library or in a park, the low-tech approach of a puppet show, or a skit, can catch their attention, hold their attention, and help them retain information.

However, that is where the best children’s television works.

They come at you with a variety of approaches, vibrant characters with bright colors and interesting voices, and some of the best writing in television.

It catches the attention of children and it sticks.

I was watching the girls watch Dora The Explorer one day. It was sort of creepy.

Dora is happily running along on whatever adventure it was, and she was faced with a puzzle.

She turns to the screen and asks what the right answer is.

I thought it was weird that a cartoon character in the television was staring at us, but the girls didn’t. They were too busy screaming answers back at Dora.

Not in a social media sort of way, but the girls respond.

They answer questions. They count and sing along. They dance when asked to dance.

My wife helps substitute teach at Sunday School from time-to-time in the younger age groups.

Sometimes I help, but it is sometimes as in a moment of absolute, utter, the earth is about to crash into the sun, desperation.

What I notice is a successful pattern to relaying information.

The content is a Bible verse or a concept, say, be kind to other people.

The children often start with a video about the idea and that is followed by a story read by the teacher.

Sometimes, the teacher has the children act out the parts as she reads the story.

There may be a Q&A, such as: How can you be kind to other people?

The children sing songs about the idea and then there is usually an art project reinforcing the idea.

By the end of the 45 minute session, the kids, even at three or four years old, have a basic understanding of the concept through an engaged multi-approach method of teaching (or marketing) with the content.

Despite the fact that we are grown and probably are not motivated by Dora or Big Bird in the same way children are, we can borrow a few lessons from the children’s television workbook.

We think of engagement as comments, shares, and likes. Those things are important, but what if we took them to another level?

A couple weeks ago, Kara Jensen wrote a post called How to Avoid Canva Fail. It garnered a decent number of comments and quite a few shares across various social platforms.

Good blog and it taught us a lot.

What if Kara had put a condition in there? You could only comment using an image you created in Canva?

I don’t know what it would do to engagement, but for those who did participate, the lessons learned in the blog would be burned into our brains.

And, who knows, you might get another blog idea or two out of the process.

It is a different way of engaging with your audience. Most people don’t want an “assignment” when they read a blog. So, like with kids, you have to make it fun.

But think beyond your traditional definition of a blog.

Spin Sucks is a blog, but it is a lot more than that. It is a professional development tool, it is a content resource, and it is a lead generation tool.

We approach Spin Sucks with excellent writing supported by good visuals at its core.

We give you the Inside PR podcast and are working on another podcast.

It is a wide range of approaches to deliver excellent content and to call Spin Sucks a “blog” is the same disservice as calling Sesame Street a puppet show.

Push the boundaries of platform and approach and really challenge your audience on engagement.

As in children’s television, do it right and your audience will respond.