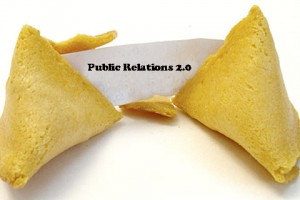 First, Twitter is trying to figure out how to clean up its act, have a consistent brand, and make money, so it’s shutting out third-party app developers. Then, Justin Timberlake announced a new MySpace, taking advantage of the hits Facebook has had on Wall Street. And rage on the social networks helped get the NFL referees back to work.

Never before have we had so little control…and so much control.

PR in the Past

I have a friend who wrote for the Wall Street Journal most of my career. If I needed him to write a story for a client, he typically did (but mostly because I only brought him stories that fit his beat and readership). In 2008, though, he was laid off and he’s not gone back to reporting.

Now we have the opportunity to create relationships with journalists and bloggers all on our own. We don’t need a middle man for that; we have direct access (watch me work us out of a job).

It used to be we’d create an annual program and see it all the way through before we’d measure results. And the only results we could truly measure were those surrounding brand awareness. If you weren’t a gigantic company with a huge budget to spend on a brand awareness study, you didn’t know whether or not your aided and unaided awareness had grown. You had to rely on intuition.

Now we know fairly immediately whether or not something is working. No more waiting a full year to complete a program and then doing an expensive brand awareness study.

This web thing? It’s fundamentally changing the way we communicate.

It won’t come as a surprise to many you the reason I love communicating via the web is because it creates the ability to measure results that tie back to real financial goals. No more media impressions and advertising equivalencies.

It flattens out the world. A boutique retailer has the same opportunities, and access to the same customers, as the big box stores.

We can now create ways to segment our customers and prospects and communicate different things to them, depending on where they are in the buying cycle.

And now, with some simple elbow grease and something to say, the opportunity to appear in the national news publications through (what we call) the response campaign is no longer reliant on an expensive PR firm with deep relationships.

Yes, it’s hard work. Yes, it takes time. Yes, you have to know where to look.

But, just like you did when you had to write that fifth grade report on the Lewis & Clark Expedition, you do your research and you figure it out.

So Why Hire PR?

I told you I was going to work us out of a job!

They all want (and expect) direct access to you.

But a communications professional? He or she can help you set the strategy, figure out what kinds of data to be analyzing, determine how to measure the right things to drive real business results, choose the right approaches (as Geoff Livingston and I discuss at great lengths in Marketing in the Round), and even execute the plan.

But the relationships? Those no longer belong to the third-party professional. Those belong to you. And you have an amazing opportunity to nurture them, engage them, and create lifetime, loyal customers out of them.

You tell me. Why do you hire PR pros? Or, if you’re a PR pro, why should an organization hire you?