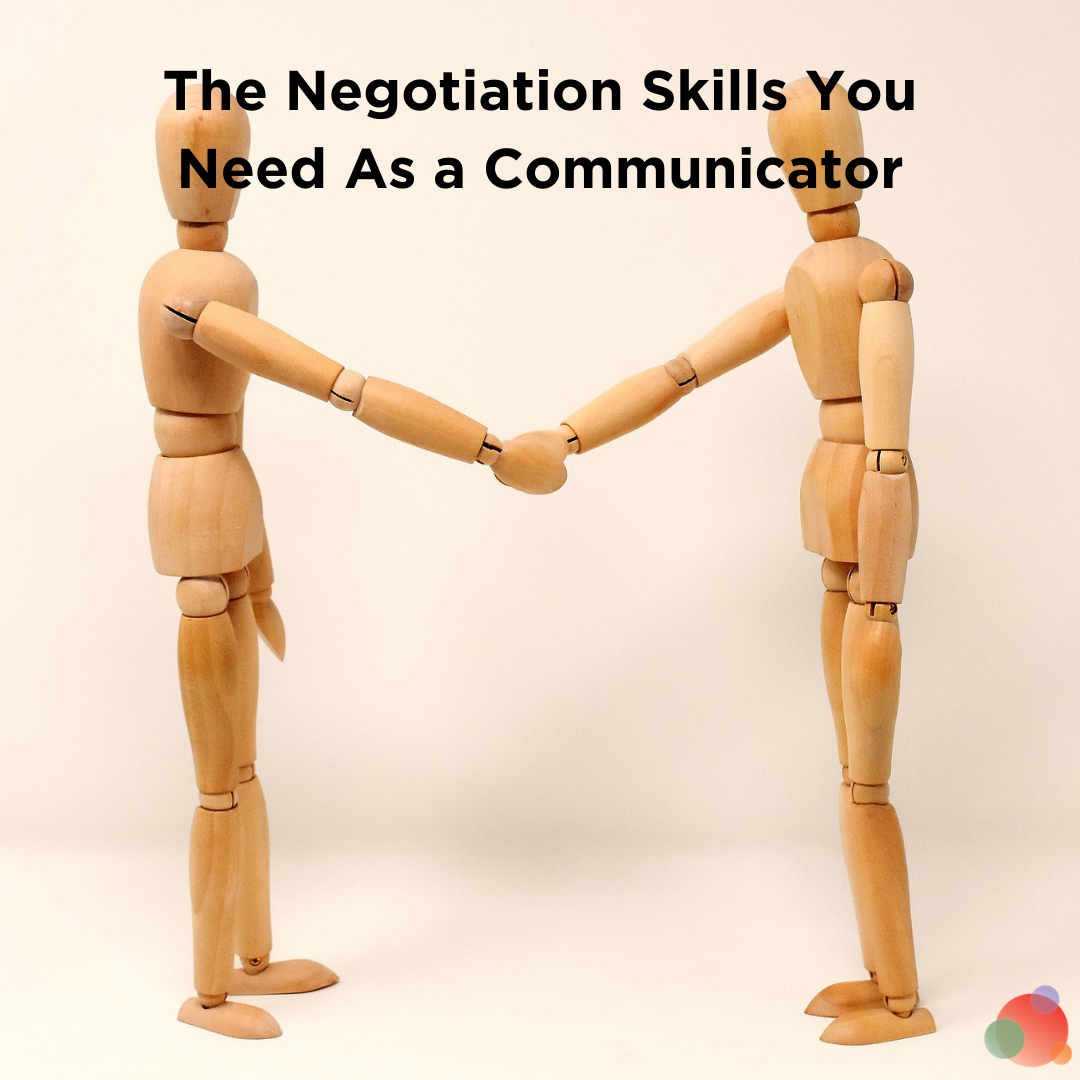 Benjamin Netanyahu once said, “You can only end a negotiation for peace if you begin it.”

He is, of course, speaking about world peace, but the concept works for business negotiations, too.

You can’t get what you want if you aren’t willing to start the conversation.

For some reason, a good majority of us avoid it like the plague.

But, as the quote says, you can’t achieve world peace if you aren’t willing to ask for it.

Let’s talk about how to ask for what you want so you can continue to grow, prosper, and be happy.

Working On Your Negotiation Skills

In a blog post a few weeks ago, Laura Petrolino talked about the four skills you need in every successful client negotiation.

She shared some great advice on how to navigate the sometimes difficult landscape of serving customers well and still being profitable.

Today, I thought it would be interesting to follow it up with some tips and strategies for different types of negotiation skills you might find yourself in as a communications professional.

Negotiation is, of course, uncomfortable.

Even for the most confident of us, there is the worry that things won’t go as intended and you’ll end up with nothing instead of something.

Add on top of it that it feels combative, talking about money stinks, and most of us think we don’t know how to do it—or at least do it so there is a favorable outcome.

So we avoid it.

We accept the first salary and title offer we receive.

Or we don’t prepare for and ask for raises or promotions. Or we don’t demand clients pay us for our value.

Even worse, we undercut ourselves pretty consistently.

But I am here to tell you, it doesn’t have to be that way.

Negotiation is finding the best, most workable outcome for everyone involved.

That means for clients, for bosses, for colleagues—and even in your personal life in selling a home, buying a car, or walking through the farmer’s market.

As you prepare for the negotiation, make sure you get really clear on what you want the outcome to be.

This isn’t so you can fight tooth and nail for it.

It’s so you have a firm sense of what will make something work for you or not, and what needs to be included in a final arrangement.

If you don’t have a good idea of your best outcome at the start of a negotiation—what is on the table to compromise and what isn’t—you can end up agreeing to something that won’t work or be sustainable for you long term.

One of the things that makes me absolutely batty is when I offer a job to a new colleague and they don’t ask questions or negotiate anything.

I mean, it’s great because it’s also uncomfortable for me and, as the business owner, my job is to get the best deal for the business.

Sure, by that point we’ve already discussed salary and title and expectations so I have a pretty good idea of what will work on both ideas.

I will also say, and this is a gross generalization, but it’s been true in my experience—men are far better at this than women.

Every man I have hired has asked for at least one concession.

I can think of only one woman in 14 years who has negotiated something.

I hate, I mean hate, how the prospecting process works in the communications industry.

You meet a prospect, you discuss the business needs, and then you go back to the office and write a proposal based on the information you got in an hour (or sometimes less) meeting.

Of course, that’s never enough information to go on and, while you have some great ideas on how to help them quickly—and there is probably some low-hanging fruit—you truly have no idea if that will help them reach their business goals.

You just don’t have enough information to go on yet.

That’s how we all do it, though.

And, because of it, it leads to price beating by the client.

Because you aren’t clear about what you can truly do to help them reach their goals, and they have a laundry list of things they think they want, it leads to the prospect asking for more than they’re paying for—and us agreeing to it all.

Using Your Negotiation Skills On a “First Date” Package

Instead, we should ditch proposals and have set pricing for certain things. I’m a big fan of dating our clients before we get married.

That’s why we have a “first date” package that we offer all new clients on the agency side.

And, on the Spin Sucks side, I counsel all of our agency owner clients to do the same.

While I know this is about negotiation, doing your new business this way prevents the need to do that.

You’ll negotiate later when you build a customized communications plan and figure out priorities together.

Your negotiation skills will come in when you’re working with the new client to help them understand there is a lot of work that needs to be done before you can make their cash registers sing.

Sure, your negotiation skills may need to shine on your first date package, but with that comes change in scope.

So you may have three tiers of your package—the ultimate, the middle, and the bottom.

But the client won’t get everything in the ultimate package for the bottom price.

The price is the price.

You can negotiate packages, but not the price.

I say this to my team all the time—we’re not a nonprofit.

We have mortgages and rent to pay, just like everyone else.

The negotiation you’ll do with prospects and clients is not to give them the best price of any other PR firm in the world.

It’s to find a solution that works best for everyone.

Sometimes that means one of your tiered first date packages works.

And sometimes it means you have to walk away.

How Not to Negotiate Pay with Your Employer or Boss

I am willing to admit that negotiating pay for a new job or a raise in your current job is scary.

It’s uncomfortable for all of us.

Probably 10 or so years ago, I hired an intern who was admittedly one of the best writers I’ve ever worked with.

Just before he hit the 30-day mark, he came into my office, closed the door, and sprawled himself into one of the chairs in front of my desk.

He asked if I had a few minutes and then launched into the story of his debt-filled life.

He had massive credit card debt, was in a lease he couldn’t afford, and he had to start repaying his student loans a week later.

To stay afloat, he needed at least a 50% raise.

I was totally bummed.

Not only was that the absolute wrong way to go about asking for a raise, I couldn’t give him one—50% or not.

You see, the internship was for four people every quarter.

They were all offered the same deal, same hourly rate, same job description.

The difference is only one of them would be hired at the end of the quarter and the rest would be sent back to school or into the world to work for our competition.

This young man was not getting a raise or a full-time job offer.

Of course, I was the bad guy in this instance.

He got really angry and quit on the spot.

You know, bit off his nose to spite his face.

He was extremely talented, though, so I hope he ended up in a role that could pay him what he needed to stay afloat and that he negotiated that at the start and not less than 30 days in.

How to Negotiate Pay with Your Employer or Boss

On the flip side, we run the marketing department for a client, which means the team reports into us.

One of the newest members of the team had just finished her first year with the client and was ready for a raise and promotion.

To prepare for the annual review, she put together a presentation that clearly laid out the value she’d been providing that was above and beyond her job responsibilities.

Her thinking was not out of line, either.

We agreed with pretty much everything she had listed and didn’t think she had an overly inflated sense of self.

To boot, she showed us the research and professional development she’d done on her own that would help her perform at the next level—and then she presented a basic plan of how she saw herself adding value to the organization in her new role.

She earned herself a raise and promotion.

Compare that to the young man who tried to make his debt problems mine and then made me the bad guy when I told him he had to work through his internship before we could talk about a raise.

Negotiation isn’t hard, but you can make it harder on yourself if you don’t handle it professionally.

It’s Not Always About Money

As you think about what you want out of the negotiation, it doesn’t always have to be money.

For instance, we hire employees around the world and that often means they don’t have the same benefits as our U.S.-based colleagues.

Because, let’s be real, almost every other country in the world provides healthcare and family leave and other benefits while the U.S…well, that’s a different topic for a different day.

Often our internationally-based colleagues will negotiate things such as extra paid time off or both U.S. and their country’s holidays off or religious holidays off or whatever is important to them.

Those things don’t cost the business anything. In fact, people are often more productive because they know they’re going to have time off.

The Three Negotiation Skills to Obtain

If you’ve ever sold a home, you know there are all sorts of give and take.

The buyer will ask for concessions because they found a scuff mark on the wall or for bigger things such as the back deck needing to be replaced but you never got around to doing it.

The same thing goes for negotiating things at work: look for things that may not cost the organization more money but will make you a happier and more productive part of the team.

There are lots of things you can negotiate outside of more money.

No matter who the negotiation is with, there are three things to keep in mind:

It doesn’t have to be scary or uncomfortable or combative.

Just prepare ahead of time and you’ll get what you want out of the deal.

And, if you need some practice, you are welcome to come to my house to negotiate with my six-year-old.

She will find every loophole you haven’t considered and prepare you for even the toughest of critics.

I’d love to know about your negotiation skills. What works and what does not?

Image by Alexas_Fotos from Pixabay