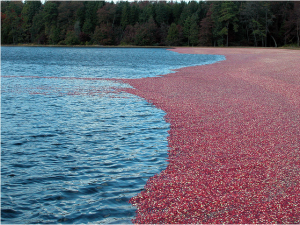 A couple of weeks ago, PR Daily asked me to share my employee to entrepreneur story. I thought you’d enjoy it as well.

For the first 13 years of my career, I worked in food and agriculture communications. From the farm to the fork is how we positioned ourselves in new business meetings, and I had the distinct pleasure of working with celebrity chefs, major brands, and wicked smart professionals.

One of my biggest (and most favorite) clients at the time was Ocean Spray. I led the team that launched 100% juices (from a PR perspective) for them and to say I felt like I owned its success is a mild understatement.

I loved working on that business. We were given creative freedom and, the year the 100% Juices came out, we created a campaign called the Art of the Ocean Spray Harvest.

They grow on bushes and, when it’s time to pick the fruit, the growers flood the farmland, forcing the berries to the top of the water, where they can then scoop them up.

Typically grown in British Columbia, Massachusetts, and Wisconsin, the landscapes vary when you harvest. You’ll see miles and miles of red berries floating on water against the mountain range in BC, for instance.

That year we hired three photographers in each of the regions to capture the beauty and then we created a traveling art show where we showcased the photos and sold smaller images on notecards, stationery, and framed photos.

The entire media world did stories about it…we had a compelling story to tell and visuals to support it. From a PR perspective, it was a huge win.

As we were doing our annual dog and pony show for our day-to-day client and the chief marketing officer, we pulled out all the stops. We had four or five six-inch binders full of clips from all the stories that had run. We even made enough money on the smaller images that we donated money to local food banks and to America’s Second Harvest.

After we finished our presentation, the CMO said, “This is really great. But I have some bad news.” She went on to tell us that not only were sales down, growers were leaving the association. So all this great work we’d done had been for naught.

Talk about a big punch in the stomach. I can still physically feel my heart sinking every time I tell the story.

It was that meeting that was the catalyst to me owning my own firm (though I didn’t know it at the time). I just knew there had to be a better way to not only measure our efforts to real business goals, but to create communications strategies that helped organizations grow.

The Birth of Arment Dietrich

A couple of years after that experience, as I was working toward really understanding how our client’s companies made money in order to measure efforts differently, a client asked me if I’d ever thought about going out on my own.

I remember snickering at him. Why would I do that? I had a great job, working for an entrepreneur I really admired. I had great clients. Things were moving along the way I’d always planned.

But then I began to fight internal battles. Some of my advertising colleagues didn’t understand PR. They thought they could bring our department their latest and greatest ad campaign and all the journalists in the world would write about them.

I got frustrated fairly quickly and that “going out on your own” conversation I’d had with a client two years earlier came back into my brain.

It was mere months before my wedding, Mr. D was moving to Chicago, and we were buying a condo. Nothing like significant life changes all at once. So, rather than put out my own shingle, I did some consulting work for three different agencies, just to get us by and make sure I had a paycheck coming in.

That lasted less than a year when I had to hire help. And, suddenly, I was building an integrated marketing communications firm in Chicago that was focused on business results instead of media impressions and advertising equivalencies.

But I’d never had a business class.

So when it came time to understanding the profit and loss statements and a balance sheet, it may as well have been Greek. And payroll taxes and benefits and quarterly filings? Forget about it! Suddenly my job became putting out HR fires and collecting invoices and not about doing my craft.

I fought it for a long time when a mentor asked me if I’d ever thought about becoming a kick butt CEO instead of continuing to be a kick butt communications professional.

That conversation changed the way I ran the business. Suddenly it was about business growth and not the craft. Suddenly we began to grow.

But I’ll also tell you it was the most expensive business training one could take. It cost me a lot more in the school of hard knocks than an MBA would have cost. A lot more.

Even if you’re not thinking about going out on your own, the best advice I can give to each of you is to learn everything you can about a business – how it makes money, what its balance sheet looks like, how the sales cycle works, what it takes to bring a product or service to market, and even what HR and legal do every day.

With those skills, not only will you be able to measure your efforts back to something that matters to the executive suite, you’ll have a seat at the table.