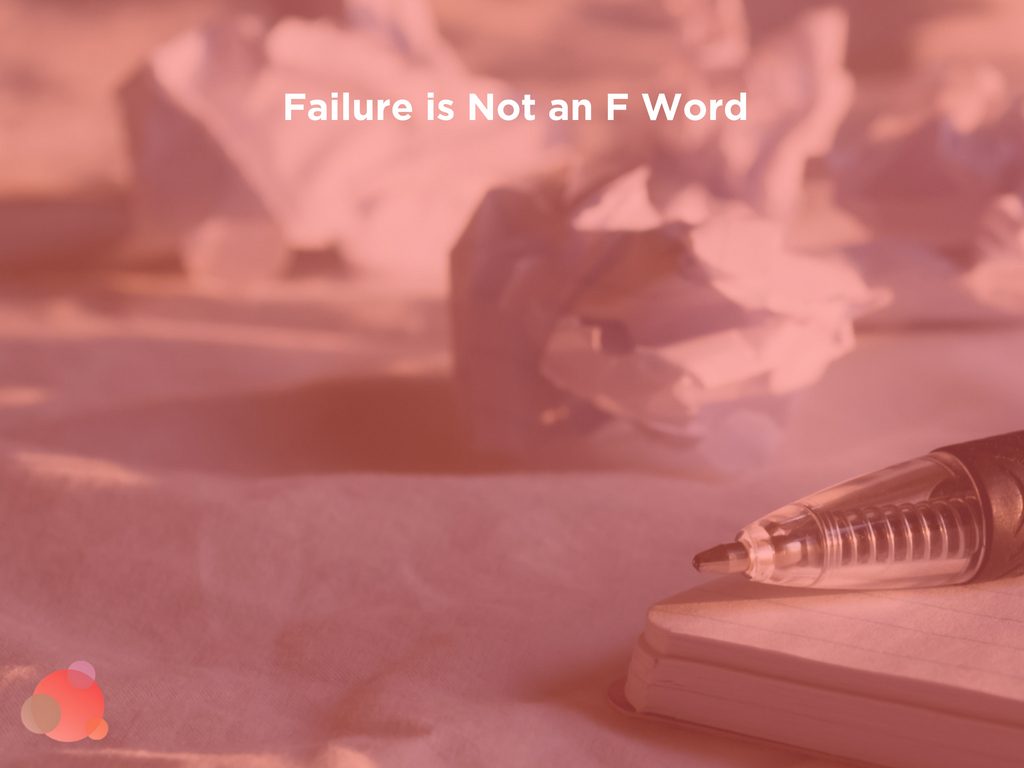 There has been a lot of discussion of late, both in my mastermind group and the PR Dream Team, about success and the ability to grow and scale our businesses.

You don’t know when clients will be ready to hire communications help. They don’t always pay on time (sometimes upwards of three months or longer). And the scope of work can go up or down, sometimes depending on their mood.

Not to mention, it’s nearly impossible to fill a consistent pipeline with enough prospects that you can build a true financial model.

But the real challenge we all face—business owner or not—is the excuses we give ourselves and the inability to allow ourselves to fail.

Failure Can Be Expensive and Depressing

In the early days of my business, I worked with a coach who liked to tease me about failure.

You’ve never really failed at anything, have you?

And I guess the short answer is no. I hadn’t. Not because I’m some smarty pants who has figured out how to escape the perils of life. But because I was fairly risk-adverse.

As it turns out though, taking risk and failing are the very best ways to learn. Period.

They can also be pretty expensive and depressing, if you allow them to be.

What is Your Version of Failure?

There are lots of ways you can look at failure. For some, it might be going bankrupt or being fired from a job.

For me, it was having to layoff half of my staff the first week of January, as soon as everyone was back from the holiday break.

In October of 2008, the bank called and said that they not only were no longer going to do business with professional services firms, but that they were shutting down our line of credit.

(Side note: today it is so insane to me that I had that many people on the payroll when our revenue was just a little more than $2MM. Go ahead and do the math. For someone who claims to love numbers, I sure was stupid about that.)

And, back then, clients never paid within 30 days. So we used the line to carry through the first payroll of the month, paying it back when we were paid.

Not to mention, it was a tad bit more than our accounts receivables, not including all of the other expenses we had.

The trouble with that strategy is it got more and more difficult to pay back the line and, when the economy tanked, it took clients even longer to pay their invoices.

You can imagine how precarious the situation, but I was pretty good at not just finding new prospects, but closing them fast. So I didn’t worry about it. I’d just work harder and faster.

And I did…until that fateful phone call that came as clients started taking communications in-house and my pipeline dried up.

Our Greatest Glory is in Getting Up

During the holiday break in 2008, just two months after that call, I received certified letters from half of our clients telling us they could no longer work with us as their budgets had been changed/moved.

When they talk about the bottom falling out, this is what they mean. And it didn’t just fall out. It dropped so far, there was no recovering.

I went into the office after New Year’s and let half of my team go. Another quarter was laid off within 30 days. It took less than a month to lose 75 percent of my team—and half of our clients.

I found myself sitting at home after work, wallowing in self-pity, and wondering if this world wouldn’t be better off without me. I thought about how my former colleagues must feel about me. And about how we hit the pinnacle of success and then bombed it in a serious way.

There were so many things I could have/should have done differently. I never should have relied so heavily on our line of credit. I should have hired only for current work, not projected work. Everyone should have been required to be fully utilized.

There also were major hiring mistakes because I hired people I liked and wanted to hang out with all day—not necessarily those exceptional at their jobs.

I beat myself up daily and I was spiraling into a deep depression. My business coach talked me off a ledge several times. I shed more tears then I’d care to admit. There even was a phone call with my banker that, to this day, I’m mortified at the way I behaved.

There was a lot (A LOT) of self-talk and pushing through even though I was miserable. I hated everything about my professional life, but I also knew no one was hiring so it wasn’t like I could just call it a day and get a job. I had to figure something out.

As luck would have it, and the way things sometimes just fall into your lap, I found this quote by Confucius at the right, exact time:

Our greatest glory is not in never falling, but in getting up every time we do.

I promptly wrote that down and taped it to my wall, where I had to see it every day. It knocked some sense into me and I began to think about how I would pick myself up and, essentially, start over.

Failure is Not an F Word

The road has not been rosy, but there certainly have been some highlights, including two published books and a second business model in Spin Sucks (which is my passion and I’m in love with working on every, single day). It’s taken nearly 10 years to reshape the business, add a second one, and include enough revenue sources that a down economy won’t require such drastic measures again. The failure was a gigantic one, but it also taught me lessons I couldn’t read in a book or pick up without experience.

Most importantly, it taught me that failure is not an F word and that it’s not in that you never fall, but in how you pick yourself up after you do.

So as you think about how unhappy you are at work or why you can’t get out of the 100+ hour workweeks, remember…risk and failure are good.

Take control of your own destiny. Try some new ideas. Work beyond your comfort zone. I promise you, you will be rewarded.