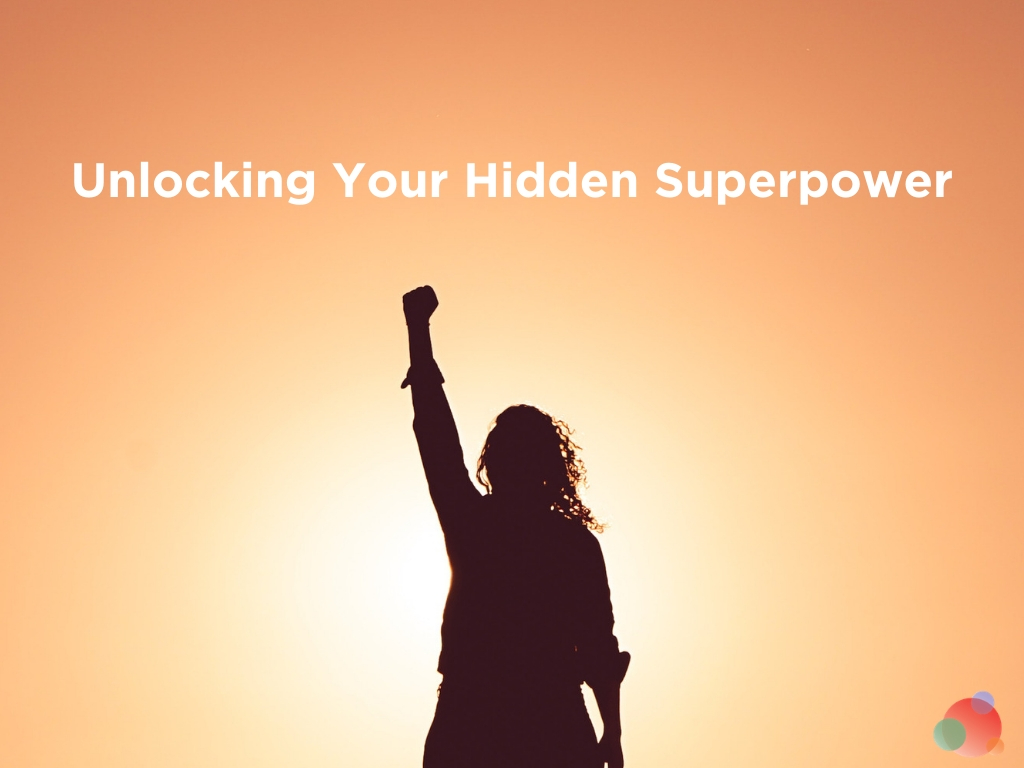 Let’s talk about a real-life, achievable superpower. Heck, maybe the only one we can all lay claim to with a little practice.

It would be nice to have one, right? Just one, real superpower, no tricks or drama. A little something to trot out at the next soporific conference call. (“Sorry, I was on mute!”)

Batman turned out to be a moody kid who got hold of some tech. Superman? An out-of-towner in red bloomers.

But this? Legit. Non-gimmicky. You–but with (and here I need you to imagine my hands waving a little reverb) superpowerrrrr.

Before I get to the superpower, let’s talk about what your life probably looks like right now. Or your business. Or even just your day so far.

If you’re average or read studies about the average among us, one word sums it up: fracturedbeyondbeliefandOMGcanIjusthaveamomenttoTHINK.

(Hey, you’ve got your one-word summaries, and I’ve got mine.)

The last few decades have turned us into a pack of rabid multitaskers.

Work in PR, and it’s practically a badge of honor to juggle three things in the service of four clients that all, magically, get billed to the same 15-minute block on your timesheet.

We do this despite the fact study after study has shown multitasking is ineffective, makes you feel productive without actually being productive, and has downfalls whether you’re packing XX or XY chromosomes.

And yet? Whether for the sake of appearance, the dopamine hit you get from constantly switching between tasks or some other reason, most of us still do it.

I won’t tell you to stop multitasking. Your brain tells you it feels good and, for those who need to please a watchful boss, it probably looks good. It is the very definition of incentivized behavior.

But, having laid out the case that it’s not all that effective, I will teach you something sneaky and viral—something that can get into your brain and your habits and actually push out the often-destructive urge to multitask.

And the solutions you come up with for clients and employers will probably have greater depth and efficacy.

If that’s not a by-God PR superpower, I don’t know what is.

One Word (And it’s Not “Plastics”)

So how do we get from there to here – away from multitasking and into the age of you with superpowers?

In a word: Clarity.

I know. The word, like “values,” and “mindfulness,” gets tossed around so much it sometimes feels like it can mean anything you want.

But clarity–the kind that gives you your PR superpower –means a very specific thing. For our purposes, it is the ability to do the following four things, together and consistently.

Train yourself to do these four things reflexively, and you rewire how you approach tasks, eliminating huge swaths of multitasking and probably doing better work.

Clarity comes down to four disciplines:

1) Identify the boundaries of what you’re thinking about or acting on. What are you trying to get done? When is it due? Are you lacking information or input that makes working on it right now ineffective? What is and isn’t part of the problem?

These sound like basic questions, but we typically don’t ask them of ourselves in our multitasking lives. We just grab the next bit of info we need, or the next thing that needs doing, and take off.

But reflexively thinking about boundaries before undertaking anything is the first step to greater clarity. The step that goes a long way to reducing time spent on any task.

Intent means active focus, which you first start to achieve by setting the boundaries mentioned earlier. And then also setting aside other tasks while you focus.

Outcome means you’ll know when you’re done because you went into whatever you’re doing having thought about the end state you want to achieve.

Like boundary setting, this sounds deceptively simple. But if you’re a typical multitasker and honestly look at how you careen from one task to another throughout the day, my guess is intent-and-outcome discipline miiiiight be a little lacking.

3) Know yourself and your skills well enough to know what trips you up, and plan for it ahead of time. Some people have a hard time with decisions. Others are genius planners who trip up on execution.

Whatever your challenge is, you can pretend it isn’t there (good luck with that) or factor it in. We all have things we must do that we’re not particularly good at. I’m not suggesting we ignore those tasks.

But instead of approaching them with dread, and then badly multitasking our way through them because we can’t stand the thought of doing something we don’t like, be mature and clear enough to say, “OK, this isn’t my strength.

And because of that, I especially need to understand the boundaries of the problem and approach it with intent because I know it will lead to a better, faster outcome.”

Bonus round: The stuff you just know you’re excellent at? The things you really love to do? Those can also trip up your clarity if the task in front of you becomes an escape from everything else you don’t want to do.

Boundaries and intent and outcome-based thinking can help you get better results even when you’re in your zone.

4) Actively respect the time, attention and humanity of those around you. Sounds out of place, right? The first three steps are mental processes relating to tasks. What’s this kumbaya stuff?

Here’s the thing, most of us interact with others throughout the day. Maybe your kid needs a kiss goodbye before he goes to the bus stop or a colleague wants your input. It could be a client calling with a question or a new project.

Whatever it is, focus your full attention on them, even if it’s only for a moment.

This is more than Emily Post politeness 101. When you’re interacting with vendors, clients or colleagues, there’s usually some knowledge exchange going on. And you can more efficiently transfer and better retain knowledge if you’re not multitasking.

From Virus to PR Superpower

These four steps – understanding boundaries before a task, intent and outcome, knowing yourself, and actively respecting those around you – act as a sort of mental virus when you undertake them.

Individually and together, they make it much harder to multitask and more likely you’ll approach tasks with production-boosting clarity.

That clarity, in a world of addled, half-focused multitaskers, is your superpower.

And before you say this is hyperbole, remember: Getting off the multitasking treadmill can help you recover up to 40 percent of your productive time.

What would you do with nearly twice the productivity you have right now? How awesome would you be to your clients, employers and even to yourself?

The steps can feel a little awkward at first. But after a while, you’ll be reflexively asking yourself about the boundaries, and intent and outcome of cleaning up the kitchen after dinner.

And you know what? You’ll do a better, faster job of it.

Photo by Miguel Bruna on Unsplash