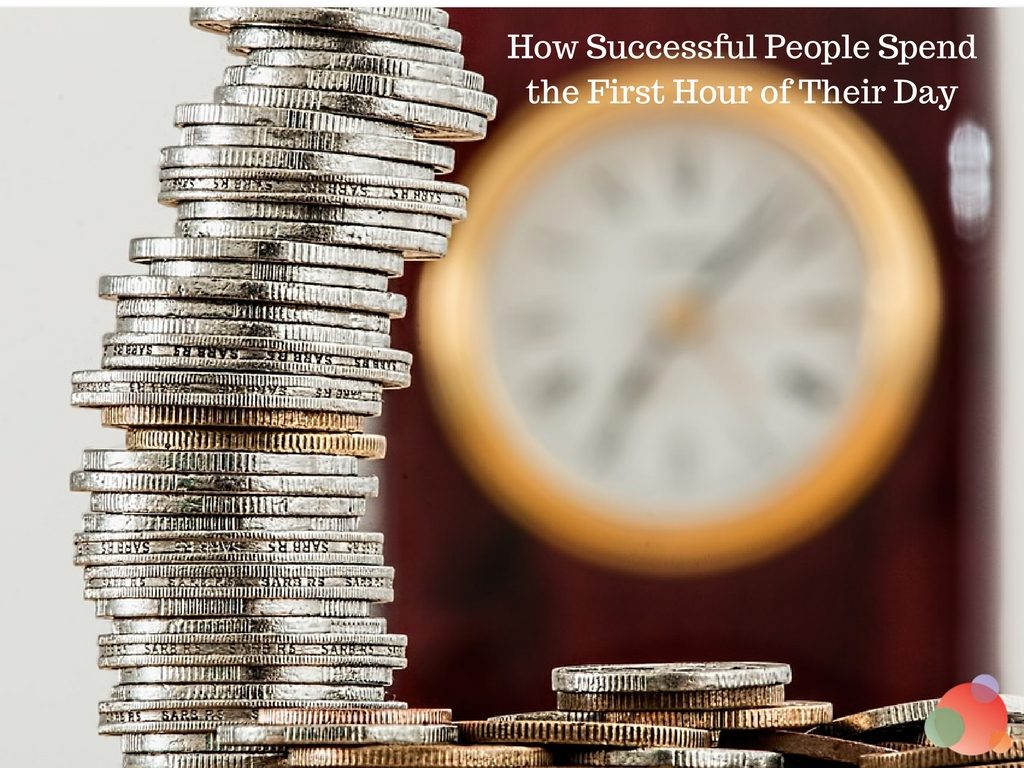 Of late, we’ve spent some time talking about productivity and getting things done.

We’ve talked about how to be more productive every day—and how to transition from being a high-achiever to a high-performer.

I even shared a visual of my work day, which some of you freaked out about, but remember this works for me and is one suggestion in myriad of others.

Even if some of the tips so far haven’t worked for you, there is a small trick that everyone can do immediately.

It will change the way you work every day.

It’s as simple as this: change how you spend the first hour of each day.

The First Hour of the Day

A few years ago, I read an article titled, “What Successful People Do With the First Hour of the Day.”

I have it bookmarked because I like to go back and re-read about how people such as David Karp  (the Tumblr founder), Tony Robbins, and other business leaders start their days. There is even a great reminder from the late Steve Jobs.

Guess how most do not start their days?

Some do, however, spend their first hour meditating, exercising, and/or visualizing their days.

Others work on the biggest project of the day so it’s behind them and the little stuff can get accomplished in between meetings and calls.

And yet others, such as Craig Newmark (the founder of Craigslist), spend their first hour on customer service—putting out fires, managing complaints, and responding to customers on both Craigslist and the boards.

I’m writing this blog post during my first hour of the day. I woke up this morning, at 5:00, with a 110 pound dog staring me in the face. After I whispered, “Just half an hour more,” he settled his nose into my neck and we slept 23 more minutes.

After feeding and walking him, I turned on my laptop and began to write this blog post.

Then I’ll get into my email and Slack, put out any fires, and help people in the PR Dream Team.

After that (and getting the small one off to school), my day will truly begin.

When we had an office, the first hour was always spent writing the day’s blog post and then I’d ride my bike.

But now with a full year of working with a coach under my belt, I ride after I’ve had three or four meals. It makes me more efficient and powerful than very first thing.

I know. I know. You don’t own a company or you don’t have that kind of flexibility or you can’t get up that early or you’re not a morning person or about a zillion other excuses.

I’ve heard it all—and that’s what they are…excuses.

There is no reason you can’t spend your first hour how you want. Sure, you may have to get up earlier than the rest of the family—or go into the office an hour earlier.

When I worked at Rhea & Kaiser. The receptionist sat at the front desk and “clocked” you in each morning. We were to be there by 8:30, but for some reason (even though I lived less than 10 minutes away), I could not, for the life of me, get there before 8:45.

I used to go round and round with Steve Rhea because I was always there until 8 p.m. or later and I did a ton of travel with clients.

That time never got counted in that extra 15 minutes I felt like I had to use for sleeping instead of getting to work on time.

Perhaps he created the 5 a.m. monster, but 10 years later, my brain rarely functions past 6 p.m., but I get a ton accomplished before noon.

My point is, you can be a morning person. You can create your own flexibility. Or tackle your biggest project of the day, from home. You can choose not to get into your email until later.

It doesn’t matter if you own the joint or not. It’s what allows you to be productive. And, I promise, any boss or client will stand down if you have results.

A Challenge For You

It’s not an easy thing to do. We’re addicted to technology and it’s certainly easier to check your email and social media while you’re still lying in bed.

Doing something else with that first hour requires you to get out of bed and do something.

And I’m willing to admit it’s really hard to do in the dead of winter.

But try it. Figure out how you want to spend your first hour—exercise, meditation, writing, reading, self-talk…whatever it takes.

And spend this week doing that.

Then report back. I’d love to hear how it’s going and how you feel. I’m also willing to bet you are far more productive and will have great results to speak of by next week.

For now, tell us how you spend the first hour of each day. Then we can hold you accountable and wait to hear a report back next week.