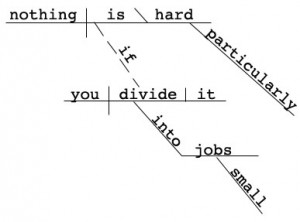 In the fifth edition of The Three Things, Michael Schechter (whom I shall call Shrek from here on out), recommended Execute, a book written in a week (well, actually eight days) by Drew Wilson and Josh Long.

The idea being, of course, that you can get big things done when you set your mind to it and really focus.

So, during this National Novel Writing Month, Shrek and I both are embarking on writing something more than a few thousand words in order to achieve individual goals. Mine is to finally write a novel and his is to make a dent on a larger writing project.

This isn’t my first book. Earlier this year, the book I co-authored with Geoff Livingston – Marketing in the Round – came out and he and I both spent the summer on the road promoting it. It is, however, my first fiction and my first solo book so we’ll see how it goes.

As Shrek began to prepare for his month of writing, he asked some friends to help him out with the blog around getting big things done.

Growing a Business from the Road

The question he asked me was, “How have you run your business this year, while you’ve been on the road promoting your book?”

But I also knew it was coming so I prepared early in the year to be away for six months. In fact, now that I’ve been home for a few weeks, I find myself looking for things to do around 3 p.m. every day because I’m so accustomed to doing my work in half days while the other half is spent on stage, speaking.

Seven years ago, I opened the doors at Arment Dietrich. I had no idea what I was doing. The only thing I knew was I was really good at communications and I knew there had to be a better way of doing things (measuring results, namely) than the way I’d been taught in the big, global PR firm world.

The first couple of years I was lucky. People were hiring PR firms left and right. Banks were loaning money. People wanted to work for the next big company. We all worked really hard doing client service and we grew in spite of no process, no procedures, and a leader who knew nothing about running business.

But then the Great Recession hit and, though I didn’t know it at the time, I was about to embark on the most expensive business lesson one could have…in the School of Hard Knocks, which cost me more than any Ivy League education.

During that extremely expensive and painful education, I sat back and looked at what it was I was doing. Did I really want to grow a business? Was I ready to take on additional risk? Or should I just call it quits and find myself a cushy SVP job at a global firm with a guaranteed paycheck and benefits?

I always knew, if I couldn’t get the business back off the ground, I could get that cushy job. So I looked at what needed to happen in order to get things going again.

In order to grow at the level I knew we could (185 percent growth this year!), I knew I had to lay the foundation. And that meant getting out there and doing things differently. No longer could we rely on word-of-mouth and referrals to gain new business.

We began to blog. I got on Twitter and painstakingly grew my following one person at a time. Then we added Facebook and LinkedIn and Google+ and YouTube and Pinterest and Instagram. All in order to promote not only the business, but Spin Sucks, which has a very lofty vision of being the resource for professional development for PR and marketing pros.

I went out on the speaking circuit and then Geoff and I wrote the book, which increased the speaking opportunities by nearly six times.

And all of that created our brand, developed our thought leadership, and increased our credibility.

Suddenly Fortune 20 companies began calling us to work with them, to create specific workshops for their employees, or to coach them on integrating social into their larger marketing mix.

But it hasn’t been easy. We set a financial goal for 2012, which we reached about three weeks ago. Now, of course, I want to see if we can hit a certain milestone by year’s end: We’re $32,000 away from it. My job is business development and, while the speaking and traveling has provided the opportunity to build relationships with potential clients, it hasn’t afforded me the time to follow-up on those opportunities.

We closed about a third of our annual business in October. All from people I met on the road. And we’re going into 2013 with more revenue signed than we’ll do in all of 2012. While we had 185 percent growth this year (and we’re not finished), we’ll more than triple our 2011 revenue in 2013.

All because of the combined power of blogging, a published book, speaking, social media, and targeted follow-up.

Next year I’ve promised myself I’ll spend only 12 weeks on the road. We’re incorporating marketing automation to help with follow-up from the speaking engagements. Growth won’t wait until I’m home and at my desk like it did this year.

A version of this first appeared on A Better Mess.