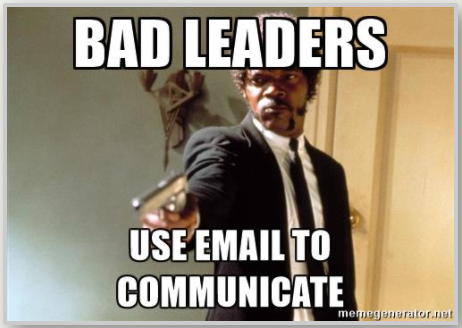 I have a love/hate relationship with email.

It’s one of the most effective ways to generate revenue.

And it’s also completely overwhelming (though, SaneBox does make life a bit easier).

It also has been said to be dying for years now.

Despite the endless predictions of its demise—and business communications platforms funded on the premise of being the next email killer—it remains a primary communications tool for many of us.

It’s also one of the biggest causes of stress in the workplace (and not just because of overflowing inboxes).

A lot of times that stress is entirely the fault of the leader.

I should know—I’ve been there.

Email in a Crisis

Several years ago, I was on the West Coast visiting our (at the time) largest client.

This client was important to me not only for their size but because they were the first client to name us their PR agency of record.

The fact that we’d won the business away from a large, global PR firm was the buttercream icing on the cake.

(Go ahead and click on that link. You won’t regret it.)

The special handling of this client was such a priority for us that I handled the client service personally.

Over dinner, the client told me he loved the work I was doing on their behalf, but he was disappointed with certain aspects of our team’s work.

As you’d expect. I asked him some questions to clarify what his concerns were and where the team needed to improve.

When I got back to the hotel that evening, I wrote an email to the team that outlined the areas where the client was unhappy, including his specific points of feedback.

I hit send and went to bed, not thinking about it being 1 a.m. in Chicago at the time.

I flew home the next day and went into the office, steeling myself to give the team a dressing down.

I was not going to lose this crucial piece of business due to avoidable, amateur mistakes on the part of my team.

I knew we were better than this!

Or Did the Email Create a Crisis?

As I sat at my desk, checking my voicemail messages, our managing director came into my office and closed the door.

I was entirely unprepared for what happened next.

She told me that email was essentially a bomb thrown into the office in the middle of the night that caused panic and chaos that she was left to clean up in my absence.

She told me how strongly it had affected the younger team members who’d felt they’d been working their hardest on the client.

I had essentially undone the firm’s morale with one poorly-timed and ill-considered email.

I learned later one of our colleagues read the email at 1 a.m. and, panicked he was going to lose his job, called a colleague.

The panic snowballed from there. No one on the team slept that night—and it was my fault.

Email isn’t Always the Right Channel for Your Message

As the leader, I should have thought about the fact that, despite my saying I didn’t expect anyone to read emails I sent outside of office hours, many team members prioritized my emails and read them the moment they hit their inboxes, just in case it was a critical client issue.

Email is never the right channel to provide detailed, negative feedback through, regardless of the time of day.

This is something I should have waited to share until until I got back in the office, had gotten some distance from the emotion of the moment, and then had a conversation with the team about it in person.

Email can be an effective tool for giving your team updates or to request things.

It’s never the right choice for having difficult conversations or to make decisions.

When to Use Email

It’s certainly a lot easier to use email when you have to have a difficult conversation.

It helps you avoid conflict.

In fact, I wouldn’t even call it horrible leadership.

It’s a sign that a manager can’t break into leadership.

There are certainly times you should use email:

When Not to Use Email

The list of when not to use email, on the other hand, is gigantic.

You should not use email:

It’s not easy to do.

Perhaps you won’t be able to have a live conversation for days.

You have the advantage of time on your side and a few days allows you to think through the conversation.

By the time you have it, you’ll no longer be angry, which is better for everyone.

Really think about this the next time you want to use email.

Ask yourself, “Does this need to be communicated right now and in this way or can it wait?”

Now the floor is yours. What experience do you have with emails that should have been conversations?