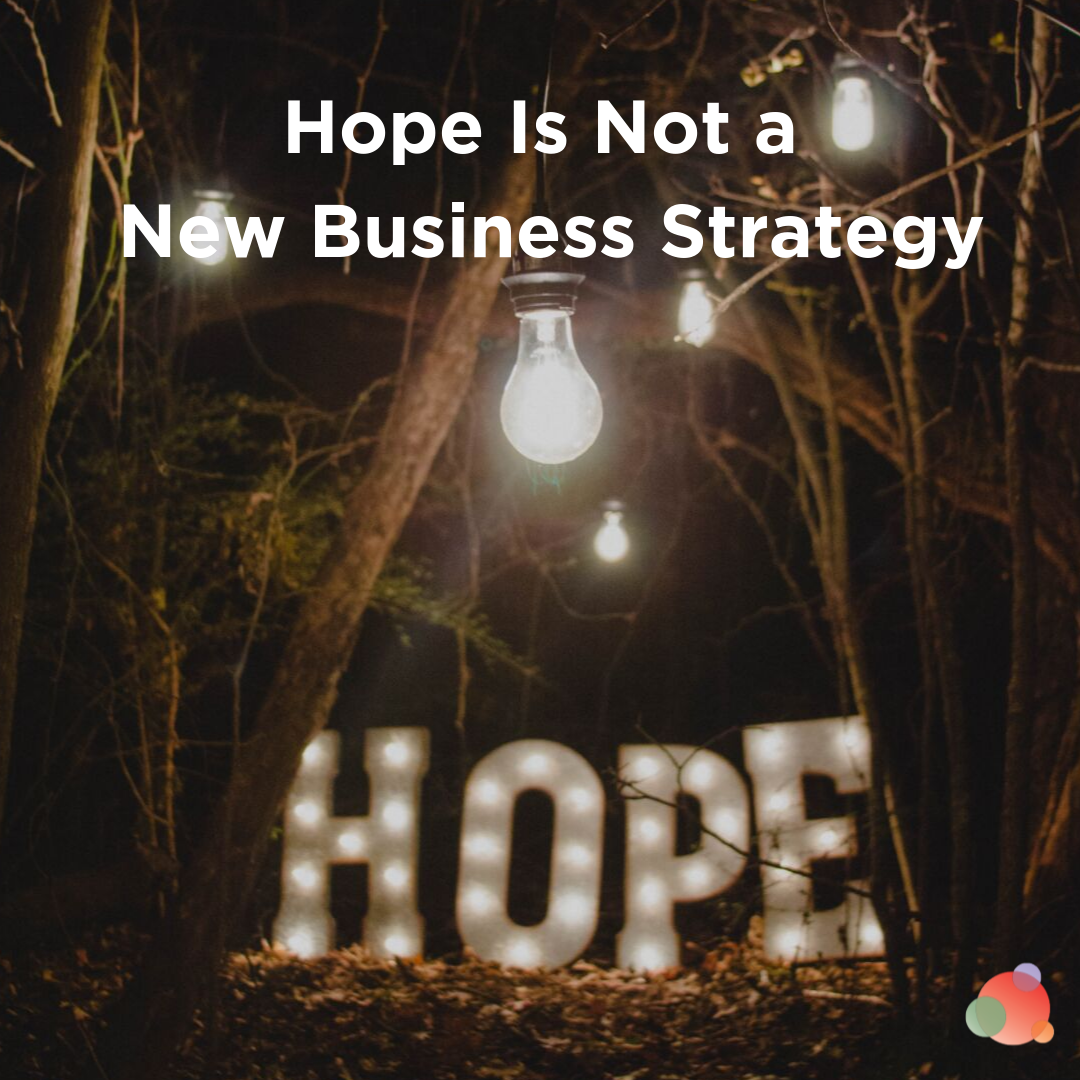 When Barack Obama ran for president in 2008, “hope” became synonymous with his campaign.

It became something we could all rally behind—hope, progress, and change—as we got ready to elect this country’s first African-American president.

In stark contrast to what we have in the White House now, hope seems, well, hopeless.

Even so, it always bothered me a little bit that people got behind the hope message because it’s not a strategy.

Of course, it wasn’t meant to be a strategy; rather a way to motivate people to make change for America and show our seriousness by electing someone different than we had in the past.

It worked. It inspired people not just in the U.S., but around the globe.

But this isn’t meant to be a political diatribe.

My point is, while “hope” inspired people globally during an election, it’s a terrible thing to rely on when growing a business.

Winning New Business With “Hope” As a Strategy

I’ve run my own agency for 14 years now—and I have used every new business strategy available to grow it.

(Yes, I’m Doogie Howser-like and started when I was 20. ? Also, the fact that I used Doogie Howser disproves that point.)

Coming from a global agency, new business was never really a problem. Prospects came to us consistently because of its brand and reputation.

Because of that, I never really learned how to do new business properly, not to mention how to consistently fill our pipeline.

When you have your own agency, particularly starting from scratch, that’s not exactly how it works. You have to actually (and I hate this word, but it works here) hustle.

Sure, you may get lots of great referrals and eventually word-of-mouth begins to work, but it also means you take every prospect on—regardless of them being ideal or not.

Some years that works really, really well and you exceed your own expectations—and other years, it all comes crashing down.

In the beginning of my agency, I would set a goal at the start of every year and then hope we would reach our goals.

We relied heavily on referrals and, truth be told, it worked really, really well for three years straight.

Hope worked as a strategy and I began to rely on it. It was sort of like shooting fish in a barrel (sorry, PETA—let’s try “a walk in the park” instead).

We didn’t have to work very hard at it and quickly built a $2MM business with 35% profit margins.

And then the economy crashed and I was left sobbing in the fetal position, wondering if I’d have to go get a big girl job at another global firm.

Hope, As It Turns Out, Is Not a Strategy

If you’re like the pre-economy crash me, you set some time aside each year to reflect on the previous 12 months and start to plan for the next.

You set revenue and profitability goals, create a list of things you want to accomplish, and are super optimistic about what’s to come.

Sometimes those goals are aggressive and sometimes they’re conservative. Either way, you just know you’re going to have the best year yet and you hit the ground running in January.

By April, the first quarter has passed and you didn’t quite do what you wanted to do, but no matter! You still have three-fourths of the year left.

Then July hits and  you still haven’t hit your goals, but you also know that this time of year is super slow and you can make it up when kids go back to school.

After all, almost everyone hires agencies in the last quarter of the year.

Then, the end of the year is here and you didn’t do what you thought you would a year ago, but that’s OK. You can restart in January.

Sound familiar? I know it’s not just me! We talk to too many of you to know I’m not alone.

Here is what we all have in common: we rely on hope as a strategy instead of implementing a predictable business development program.

We also may have some of these other symptoms in common:

And the doozy I think we are all guilty of doing…

We set financial targets every year, without having a single clue where the clients or revenue will come from.

This, my friends, is not good.

It’s cross your fingers marketing and it means we’ve spent far too long relying on hope as a strategy.

The Importance of a Predictable New Business Program

The only way you can set goals and achieve them without relying on hope is to craft a predictable new business program.

You’re not a sales person. You don’t have time. All of your days are spent with clients.

But if you start to think about new business less as sales and more as talking to people you can genuinely help (and it’s truly a conversation not a used car sales pitch), you’ll actually begin to enjoy the process.

And you’ll do all of this while tapping into the joy you first had when you started your agency and began to work with paying clients.

If you have no idea where to start, we can help!

We also have some tips and tricks in forthcoming articles later this month and into August that will help. So stay tuned for those.

Take Control of Your Agency’s Growth Without Using Hope

With a proactive and predictable new business program, you can build a sustainable agency without following the “rules” of the industry.

You do can do it without writing proposals or responding to RFPs.

You can do it without relying on referrals and word-of-mouth.

But mostly without saying to yourself, “The clients will come along. They always do.”

Stop with the cross your fingers marketing. Stop relying on hope as a strategy.

Take control of your new business pipeline and you will be rewarded handsomely.

Photo by Ron Smith on Unsplash