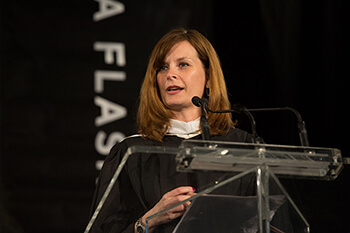 OK! Here it is in all its glory!

It’s really long—more than 2,000 words—so I’ve included the video, if you prefer to watch over reading.

To have found your way here today, some of you as Tribeca Flashpoint College’s first bachelor degree graduates, each of you has had significant achievements, both in school and already out there in the real world.

I know some of you have already worked for Second City, The Mill, Thrill Ride, and The Onion. And, let’s be real, if you can work at The Onion or Second City, you must be hilarious and I want to be your friend!

To see so much success before you graduate is exciting and empowering and I want to congratulate each and every one of you.

I’m honored to commemorate this day with you, alongside your teachers, your peers, your family, and your friends. But I have something to confess: I have conflicted feelings about being here. Selfishly, I’m excited to be able to say I now have an honorary degree from Tribeca Flashpoint College. You can bet I will be bragging about that to my friends as often as humanly possible.

The reason Peter asked me to be here today is because of what my business stands for and because I have a unique position to tell you how to use social media to build your personal brand and reputation.

The Unique Position of Spin Sucks

You see, I run a business called Spin Sucks. It started as a blog in 2006, as a response to the perception people have of the PR industry. When you tell someone you do PR for a living, you get one of two responses: The first is, “Oh! You’re a spin doctor!” Or they say, “Ah, yes! You lie for a living.”

That’s my favorite one because, in fact, I do not lie for a living. And most PR professionals do not. Sure, just like every industry, there are really ethical human beings and there are not-so-ethical human beings. The problem with my industry, of course, is most people have seen too many movies and we all know movies are totally representative of real life.

So Spin Sucks was born as a way for us to showcase all of the great things PR professionals do every, single day. Then a book came out of it. And now it’s a real business that generates real money. It turns out, people are attracted to other people who have integrity, who are ethical, and who stand up for what they believe in.

But the reason I’m conflicted to have had to figure out something to say to this particular class at this particular time is because technology is changing so very quickly not only how we work, but how we live.

Technology Is Changing So Quickly

Think about it from your own perspective. What you learned about the tools available to you as freshmen have completely changed or, in some cases, no longer exist. I have a friend who was a creative director at HARPO and she talks all the time about how you have to use Photoshop every, single day or you’ll get behind with all of the changes. Now extend beyond that one piece of software and think about how technology is constantly changing our lives before our very eyes.

I mean, Microsoft is working on holoportation, which allows you to port yourself into a location via a virtual reality headset and a TV screen. I hope you’re not too young to know this…it is a classic and you ARE graduating from a media arts school, after all. You know how in the first Star Wars—the original from the 70s;—Princess Leia left a message for Obi-Wan Kenobi with a hologram? That’s going to be a very real thing in just a few years.

Think about it. Now you can “attend” Thanksgiving dinner and be back in your condo before Uncle Rich gets drunk and starts talking politics. Even if your parents are 3,000 miles away. Sorry, parents. It’s a sign of the changing times.

Not to mention driverless cars, jetpacks that allow you to fly, 3D printed food, and sun-powered charging for our phones, laptops, tablets…maybe even our brains so we no longer have to sleep.

You’ll notice that two of those things have to do with social media and one not so much. In my business, we have lots of young professionals join our ranks. When they have the kinds of education and experience like all of you have, it’s ridiculously fun to work with them. That’s the good news.

The bad news is, after 11 years of running a business, I have ever only had one young professional ask for more than I offered. And, in fairness, it wasn’t him who asked. It was his dad. His dad picked up the phone and called me. He said, “This offer you’ve presented my son is a low ball offer and I will not pretend he should entertain it.”

I told him I was very happy to have that conversation with his son, but I would not negotiate with him. A few days later, I was in a meeting in my office, with the door closed, when someone barged in without knocking. I’ll never forget the look on my assistant’s face as she tried to prevent this man from coming in—and then realizing I may kill her for allowing it (I didn’t; it wasn’t her fault).

It was the kid’s father. He got up in my face, literally two inches from my nose, and told me I would make a different offer to his son or he would have something to say about it. While trying not to wet my pants from fear, I calmly (or as calmly as I could muster) told him to leave my office. Thankfully the meeting I was in was with two other men who helped escort him out. I’m not sure what would have happened had I been there alone.

So I guess I have four pieces of advice: The fourth is don’t let your parents negotiate your salary. It doesn’t look good for you and the offer will most likely be rescinded.

Here’s the thing: You may be young, but you are significant. Go back to all of the places I I listed at the beginning where you have already gotten real-world experience. You are significant. What you’ve learned, your talent, your unique skills…organizations need all of that so don’t let being young overshadow your significance.

The only person who is looking out for you is you so be good to you. Sure, you’ll have bosses and managers and supervisors who will fight for you, but they won’t know what YOU want if you don’t ask for it. The worst you’ll hear is “no” and, as it turns out, that is not the end of the world. It gives you the opportunity to approach it later from a different perspective and get the answer you want.

This applies to life, both online and off. Because I spend the majority of my time online, I have the unique opportunity to see the stupid things people do without really thinking about it (and, of course, being able to armchair quarterback it all).

A Case Study In What Not to Do

I’m reminded of the woman who is a communications veteran working for one of 2014’s hottest start-ups. She knows how to use social media effectively. She knows how to build a brand and reputation online. She is extremely experienced and savvy…and she made a big mistake.

She went to South Africa during the holidays to visit her family and was a little bored during layovers so she turned to Twitter.

During the trip, she tweeted little jokes about travel and her fellow passengers. There was one she tweeted as she left JFK for London, “Weird German Dude: You’re in First Class. It’s 2014. Get some deodorant.’ — Inner monologue as I inhale BO. Thank heaven for pharmaceuticals.”

Then, while on a layover at Heathrow, “Chilly. Cucumber sandwiches. Bad teeth. Back in London!”

And, then, before the final leg of her trip to Cape Town, she tweeted, “Going to Africa. Hope I don’t get AIDS. Just kidding. I’m white!”

She chuckled to herself as she pressed send on this last one, then wandered around Heathrow for half an hour, sporadically checking her phone. No one replied, which didn’t surprise her. She had only 170 Twitter followers.

She boarded the plane. It was an 11-hour flight, so she slept. When the plane landed in Cape Town and was taxiing on the runway, she turned on her phone. Right away, she had a text from someone she hadn’t spoken to since high school, “I’m so sorry to see what’s happening.” She looked at it, baffled.

Then another text: “You need to call me immediately.” It was from her best friend, who then called to say, “You’re the number one worldwide trend on Twitter right now.”

People were furious. They called her racist. They wanted her head. And they got it. Not literally, of course, but figuratively. She lost her job, closed her Twitter account, and went into hiding—outside of the United States—for nearly a year.

When she finally told her side of the story, she admitted she was trying to be funny, but now realizes she’s not “a writer on South Park” and had no business tweeting anything she thought to be making a statement on racism or white privilege.

What a hard lesson for a human being to learn. To be dragged through the coals by strangers because you thought you were being funny. And, what the heck, you only have 170 Twitter followers and you imagine those people totally get your sense of humor. Until you tweet something publicly and someone not in your core group of friends sees it and then it becomes a complete lapse of judgement.

She Forgot the Three Tips

She forgot the three tips: One, don’t post anything online that could embarrass yourself. Two, everything online lasts forever. She deleted the tweet, but it isn’t hard to find it in multiple spots on the web. And the third thing was that, while she wasn’t negotiating a salary, she didn’t negotiate her way out of the mess. She went into hiding instead. It took her more than a year to tell her side of the story.

I’m fairly certain we can all agree none of us ever want to be there.

My mom isn’t the only one with smart quips in our family. My dad always used to tell us never to put anything in writing that could be used against you later. You’d think he was a lawyer, but no. He just knew that kind of advice would follow us throughout our lives and now I bestow it upon you.

This goes to the belly shots from the bar, the meant-to-be-funny tweets, or even just venting about a friend, colleague, or worse, your boss.

As I stand here today and look out among you, I will remind you that everything you post online lives forever. I want you to think about that as you go out into the world. Be smart about what you post. But more, have integrity, which means you always do the right thing especially when no one is looking.

If you are honest…

If you have integrity…

If you are ethical…

If you think before you speak or post online…

If you keep your head about you…

Your personal brand will be achieved—both online and off.

Your reputation will stay in tact.

And you’ll never become the number one worldwide trending topic on Twitter.