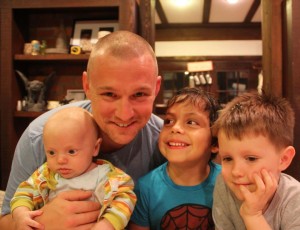 I finally got to meet Nate Riggs last week and he’s exactly as I expected.

He works and lives in Columbus and helped last week’s #FollowFriday, Michael Bowers, figure out the educational tracks for the Ohio Growth Summit, get the speakers secured, and organize the topics. He even moderated some of the panels, which he was really good at doing.

When I arrived at the conference, the content educational track he was moderating had already begun so I snuck in the back and sat at a table where I wouldn’t disturb anyone with my tardiness.

The panel was really good and I was taking lots of notes to bring back to the office.

About 10 minutes before lunch, a new friend, Dave Hunegnaw, came into the room and kneeled beside me to chat.

I was chatting with him when the panel ended and Nate was announcing lunch to the attendees. Before he did, though, he said, “Everyone stand up, turn around, and wave hello to this afternoon’s keynote, Gini Dietrich.”

Everyone did and I was busy chatting with Dave. Nice going, Gin!

But moderating panels and embarrassing me isn’t all Nate does. Until recently, he ran his own business, but with three boys (two five year olds and a baby) he decided he needed to have some more stability and consistency.

He sold his business to The Karcher Group, a web marketing firm, and now is their director of social business. And he is flourishing. When I asked him how it is to be working for someone again, a sparkle hit his eye and he grinned as he told me how well things are going.

You can find Nate all over the web, including Twitter, LinkedIn, YouTube, Vimeo (where you’ll see a video with me; skip to the very end to see the outtakes), Quora, Google+, and his blog.

And, if you ever have the chance to see him speak, even if he’s simply moderating a panel, I highly recommend it. He’s one of the best I’ve ever seen.