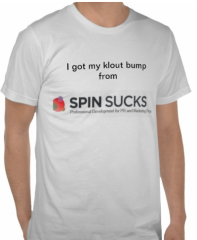 My experiment with influence scoring started a few weeks back with a post on Spin Sucks about the future of public relations.

And that begat a three-point bump in my Klout score!

Earlier this month, I wrote about my Klout Bump and, because the wonderfully energetic community here was mainly responsible for it, I decided to try an experiment.

I wanted to see if I could push it higher, and also determine what types of interactions would help boost it to my goal number.

That goal? Getting to 70 – a further two point increase. (Big whoop.)

I Have a Secret

Klout scores remind me of high school grades. So a 90 would be equivalent to an A-, 80 a B-, 70 a C-, and so on. Maybe that’s why my earlier analogy referenced high school popularity.

Essentially I was trying to go from being a D to a low C student. And I wanted to do this by enlisting the cheerleading squad, and not via hard work. In any environment, that’s a dubious path.

But it was all for scientific research, right?

Here are the Results

Drumroll please. Or maybe a sad trombone… I did reach 70, fleetingly on one day, then again a few days later, for a little bit longer. It’s now settled back to 69 (at the time of writing) and will likely fall back to its regular pre-post level soon.

That said, I’m sticking by my original offer, and giving out a couple of perks (for more on the perks, see below).

But First: What Did I Learn?

I’d always suspected an intense level of activity within a tight community over a short period of time would artificially increase a Klout score. And that seems to hold true.

But what does that say about influence scoring and actual influence? Not much. In the case of Klout, they seem to measure it over relatively brief time spans – reminiscent of day trading. Score increases aren’t really there for the long-term. Whereas true influence is built up slowly over time.

And while it’s fun to see the little graph increases, did I get any new clients or other opportunities from the bump? Nope. Nada. Nothing. So from a purely business perspective, this tells me it’s likely not a metric I should give much credence to.

My big takeaway centers more on the concept of influence, and the way we promise it to brands. It feels like we’re positioning it all wrong. Influencers are not people who utter a command and their automatons blindly follow (at least, let’s hope not).

True influence has to do with deep, trusting relationships, as well as persuasive communication encouraging people to consider another point of view.

Influence is far more complex than a simple call to action, which seems to be what we’re offering. So let’s stop that.

I hope the @Klout folks weigh in on this because so far they’ve stayed out of the conversation. I’d be curious to hear how they define influencer.

And I’m equally curious to hear from all of you.

And Now, the Perks!

First off a big THANK YOU to Gini Dietrich, Lindsay Bell-Wheeler, Yvette Pistorio, and the entire Spin Sucks team and community for tagging along, supporting me and the idea, and for all your insights and comments. I really appreciate it!

I have two prizes to offer, and if you want to know the criteria I used to make my selections, well, all I can say is it’s a proprietary algorithm I developed and unfortunately, I’m not prepared to divulge what it measures. (Ed’s Note: This isn’t the Academy Awards, Martin.)

Paula Kiger: For jumping on the bandwagon first, and creating a hashtag!

Rebecca Todd: For agreeing to be campaign manager and adding a Canadian flavor(u)r!

You both get a custom ‘I got my Klout Bump from Spin Sucks’ t-shirt (pictured above). We’ll post this on the Arment Dietrich Facebook page too, and organize the shipping details there.

And now this faux-scientist bids you farewell as my Klout roll of the dice comes to an end. I’d love to hear any Klout stories you have. And again, thank you!