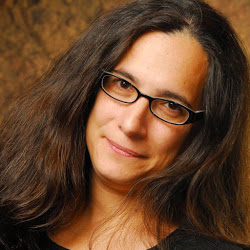 Spam filters grow ever more clever, stopping it from even getting to us, more often than not.

We’re all tired of it.

But it works, apparently. Enough for people to keep doing it.

Enough for people to keep sending ot invitations for us to buy pills, sex, or indirectly, money.

Spam has different goals: Sometimes it’s to get a backlink.

Sometimes it’s a phishing scam. Sometimes they simply just want to separate you from you from your money by promising you narcotics or Viagra at a fraction of their usual cost (and no prescription needed).

One of my personal recent favorites escalated from simply messages from “ladie” for me, to “Serbian sluts.” No reaction? OK, how about browsing photos of some Jewish single people? You know, if that’s more your speed.

I want to meet the people who click on these. Does anyone really believe they’ve been lucky enough to receive a random offer of randy Serbian women ready to meet with them? And why Serbian? Why not Ukranian? Congolese? Canadian? (Who knows – maybe in Serbia, the spammy ladies who are ready and waiting actually ARE Canadian.)

My Facebook “other” inbox right now is overflowing with people telling me how beautiful I am. And would I maybe like to just chat with them?

One particularly, from Sgt. Bob, was fabulous in its depth. He’s divorced and in the U.S. Army. Or works for the U.S. Army. Or something like that. Anyway, he was soft searching (which means?) for an old friend and saw my profile. Well, it turns out I am the kind of woman he’s been searching for! Can you imagine that?

What are the odds? I’m the luckiest girl in the world, because he’s not into cybersex or anything, just wants a friend. And wants to spend the rest of his life with me. 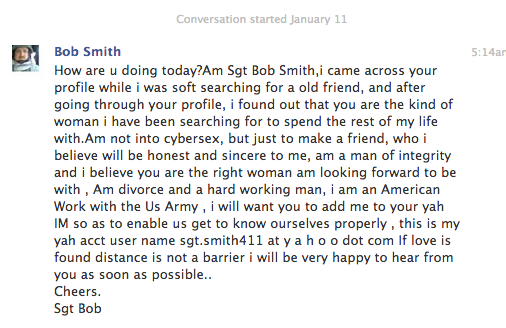 And I’ve also been provided info that’s super-important. I’m not sure what it was, because I really just haven’t had the time to call. If you called, let me know. I’m sure it’s a major investment tip.

I also like the personal encouragement this next guy had for me. I mean, isn’t it time I stopped procrastinating? However, I doubt I’ll wonder why I didn’t do it sooner. After all, that’s what procrastination is, right?

My true spam love, however, is blog comment spam. So much so that I started a Tumblr for it a while back.

It’s easy to spam blog comments with a list of keywords and some spammy linkbacks. It’s another skill entirely to craft what is very nearly poetry.

“Man if i ever saw two racoons fighting over a blogs itd (sic) be this one, nicely done my friend. Keep it up.”

That’s my all-time favorite blog comment spam. I mean, I didn’t even know that raccoons read. And definitely didn’t know they had Internet service in the woods. Probably dial-up, but still.

That’s one of those comments, though, that makes me wonder what the creator was thinking. Why raccoons? What was the spambot programmed with that led it to come up with that?

A close second is this one, which is nearly worthy of being a Zen kōan: “What happens if you get scared half to death twice?”

Simple math would indicate you’re just a quarter alive. But I feel as if the answer can’t be quite so simple as that.

Like the sound of one hand clapping, the answer is both simple and unanswerable.

A 20-year veteran of newspaper journalism, Amy Vernon is general manager of social marketing for NYC tech startup Internet Media Labs, which creates tools and platforms to help tame the social web. Amy is an inaugural inductee of the New Jersey Social Media Hall of Fame and top female submitter of all time on Digg.com.