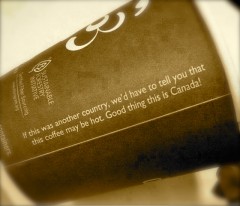 Noise. We all live with it. Everyday. All day long.

For most of us, the first sound we hear in the morning is the alarm clock.

It’s annoying. And loud. And it just keeps getting louder.

Noise pollution is so common you almost ‘don’t hear it’ anymore in your day-to-day lives. Except you do, really. And it’s been proven time and again the effects of noise pollution go above and beyond hearing loss.

According to the Unites States Environmental Protection Agency, “Sound becomes unwanted when it either interferes with normal activities such as sleeping, conversation, or disrupts or diminishes one’s quality of life….Problems related to noise include stress related illnesses, high blood pressure, speech interference, hearing loss, sleep disruption, and lost productivity.”

Yup. The issues above all make perfect sense to me. Especially lost productivity. I can’t work in a noisy environment. Can’t think when the TV or radio is on, or when people around me are talking. In fact, even at a party, I’ll have to ‘plug’ my other ear to muffle out some of the noise so I can concentrate on the conversation at hand.

That’s why I was so interested when I stumbled across this article from the New York Times blog.

Titled “How the Hum of a Coffee Shop Can Boost Creativity,” the article outlines an interesting experiment. Researchers at the University of Illinois at Urbana-Champaign wanted to specifically explore the effects of noise on creative thinking.

They asked their research subjects to brainstorm ideas while being exposed to varying levels of noise. The results were surprising. Well, to me at least.

It turns out, when exposed to background noise of about 70 decibels (tantamount to a busy coffee shop or a television playing), study participants’ creativity went up, compared to the relative peace of 50 decibels. They found ‘noise tolerance and creativity’ peaked at about 85 decibels (say, a blender, or garbage disposal).

As you know, we run a virtual office at Arment Dietrich, so if we so desire, we can easily pop over to the local Starbucks for a little creativity boosting coffee shop noise. But if you don’t have that luxury, fear not! Once again, necessity has proven to be the mother of invention.

I present to you: Coffitivity! The brainchild of colleagues who realized they got their best work done while hanging out in coffee shops (and whose boss was old-school, and wouldn’t allow them to work in one officially), Coffitivity is a free website that plays ambient coffee shop noise. Non-stop. It’s actually pretty cool – I’m listening to it as I write this piece – but I’m not sure I feel any more creatively inspired than normal! LOL

The site, while still in beta, has gotten a ton of buzz (no pun intended), and the creators are in the process of developing apps. Interesting stats about users: Seoul, Korea, is the number one user city, followed by New York, then London, L.A, and Chicago.

I’d be interested to see whether there’s a correlation between “world’s noisiest cities” and Coffitivity usage. It sure would be far more pleasant to listen to mugs clinking and espresso machines hissing, rather than jackhammers and ambulance sirens!

What do you think? Does noise pollution drive you bonkers? Do you work well with background noise? And will you give Coffitivity a test run?

NOTE: I have no affiliation with Coffitivity, and they have no clue I’m writing this article.

P.S. Don’t forget! This Thursday we have email marketing genius and DJ Waldow on Spin Sucks Pro for a free webinar. You can register here.