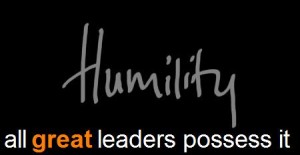 I have a great leader.

But say what you will, it simply is fact.

I can say this because I’m old.

Being old usually means you have (hopefully) achieved a few things.

Have a bit of life experience and some perspective.

And have worked under a number of different leaders in the course of your career.

I certainly have, and most of them weren’t worth writing home about.

In fact, the various leaders I have had the (dis) pleasure of working with in the past have included despots, control freaks, paranoics, and patronizers. Gini Dietrich is none of those things.

The reason Gini is none of those things – her personality aside – is because she humbly recognized something early on: If she was going to be a great leader, she had to lead herself first.

She’s spoken openly about using various career or leadership coaches, in order to better not only herself, but her entire team and, ultimately, her company and its future.

The word humble isn’t often associated with leaders. It speaks of deference, of submission. One gives ‘a humble apology.’ Arrogant people are ‘humbled’ when taken down a notch.

But humility in leadership has been found to be one of the most important traits to have.

Researchers from the University of Boston have found those three leadership qualities are powerful predictors of the potential for an organization’s growth. These ‘humble leaders’ encourage learning, believe in team work, and are generally seen as more likeable and relatable than egotistical bosses. Not surprisingly, humble leaders experience lower staff turnover.

Another interesting tidbit from this study? Experienced white male leaders end up reaping the most benefits from this so-called ‘selfless leadership style,’ perhaps because it’s so unexpected and unusual for experienced white male leaders to lead that way. Of course, ‘unexpected and unusual’ is a generalization, but hey, history speaks for itself.

The How-tos of Humility in Leadership

So how can leaders embrace their humble side? Let’s Grow Leaders has compiled nine fantastic ways for leaders to achieve humility:

My experience here at Spin Sucks and at Arment Dietrich these last six months has shown me our leader practices all of the above. Say I’m brown nosing if you will, but the facts don’t lie.

So, I ask you – what type of leader are you, or do you work for? And do you feel there’s room for humility in great leaders, or could it be perceived as a sign of weakness?

Thanks to N2 Growth for the image.