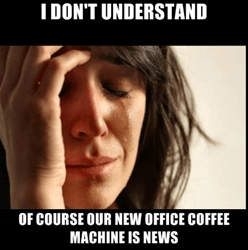 I can say that because I am one, but also because those of you who do blogger and media relations disappoint me.

It’s rare these days for me to go out with friends without hearing a story of how a PR person didn’t do their research or prepare their client for an interview before a blogger or “social media influencer” was approached.

In fact, it’s become a game to see who can tell me the worst story they’ve had of late. Their ultimate goal is to hear me yell, “I hate PR people!”

Unfortunately, it’s a refrain both friends and my Arment Dietrich team hear a lot.

Take the Auto Show, for instance. A handful of social media influencers were invited as media to a dinner and the opening without an understanding of why they were there. From my purview, it looks like the PR people went to the Social Media Club website, downloaded a list of their former and current board members, and invited those people.

No research. No discussion about why each was invited. No review of whether or not they have blogs and if those blogs fit the client’s needs. No expectations set. No client preparation for the interviews. Nothing.

Not only did the bloggers/influencers not understand why they were there (though it sounds like they  had a blast…and free dinner), the clients didn’t know who each of them were and were not prepared to answer specific questions about the blogger’s expertise or topic.

I get it. I do. Your job is to get as many interviews during the show as you can. No one said they had to be good interviews or make sense for the client. As long as the interviews happened and your client was busy talking to many bloggers or journalists, the event is a perceived success.

Even better if all of those people write something, but I know you can’t guarantee that they will, so you don’t.

But it’s not just events. It’s daily pitching that is a disaster, too.

I know we’ve talked about this before and I also realize most of you who read this blog are not the offenders.

Perhaps you’ll either forward this to a friend or they’ll find it through search (but that also means they know they’re doing something wrong and want to fix it, which is a huuuuuge leap).

The Rules of Pitching

I’ve put together a list of seven things you must do when pitching a blogger or journalist, no matter if it’s for an event or a story you want us to cover.

As Mitch Joel always says, “If the pitch is relevant to me, it works 100 percent of the time.” Wouldn’t you rather follow the steps above, create a really relevant pitch, send it to only 20 people and have all of them run something instead of sending the same, exact pitch to 2,000 people and have no one run it?