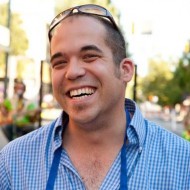 I’ve always fancied myself a student of linguistics.

One of my favorite courses during my undergraduate career at Elizabethtown College was called History of the Language. Much of the course work was focused on identifying and discussing the pressures exerted on English by various historical, social, and economic forces and charting the evolution of the language through various literary forms.

It was a fascinating (albeit grueling) course that gives color to the way in which I observe conversation and discourse on the social web.

In his 1962 book The Five Clocks, German linguist Martin Joos introduced a model that describes the five registers (a variety of language chosen by the speaker relative to context or social setting) of English.

What makes all of this so interesting is how quickly and deftly we can shift between various registers in response to changing context. Quite the trick, if you ask me. When placed in the social space, the mental gymnastics required are not insignificant. We make hundreds of decisions daily about word choice, tone, and sentiment when playing in the digital sandbox.

Evolutionary anthropologist Robin Dunbar has suggested there is a theoretical cognitive limit to the number of people with whom one can maintain stable social relationships. Digital developments propelled through our social graphs encourage contact across geographical and social barriers, but the most profound interactions are those held in close proximity to one another. In short, relationships must be encouraged and cultivated away from the online.

In this context, language (and our connection to – and through – its mechanisms) can also function as social and cultural identifiers within speech communities; that is, discrete groups of people who share generally accepted norms and expectations about the usage of linguistic communication. It’s not just about which language you speak, it’s how.

So what does this mean to media and communications professionals? Social networks have existed long before the onset of digital communications platforms and tools as we strive to align ourselves within social frameworks and subcultures. Language’s fluidity ensures that meaning is co-opted constantly as a function of our deeply seated need to belong and self-actualize.

When not writing copy and blogging at Vocus, Jason Konopinski acts as head pen monkey and content strategist for hire at JMK Media & Communications in Hanover, Pa. An advocate of social good and strong storytelling, Jason works with small-to-medium sized corporate and agency clients to produce rock-solid audience responsive content. Follow him on Twitter at jasonkonopinksi.