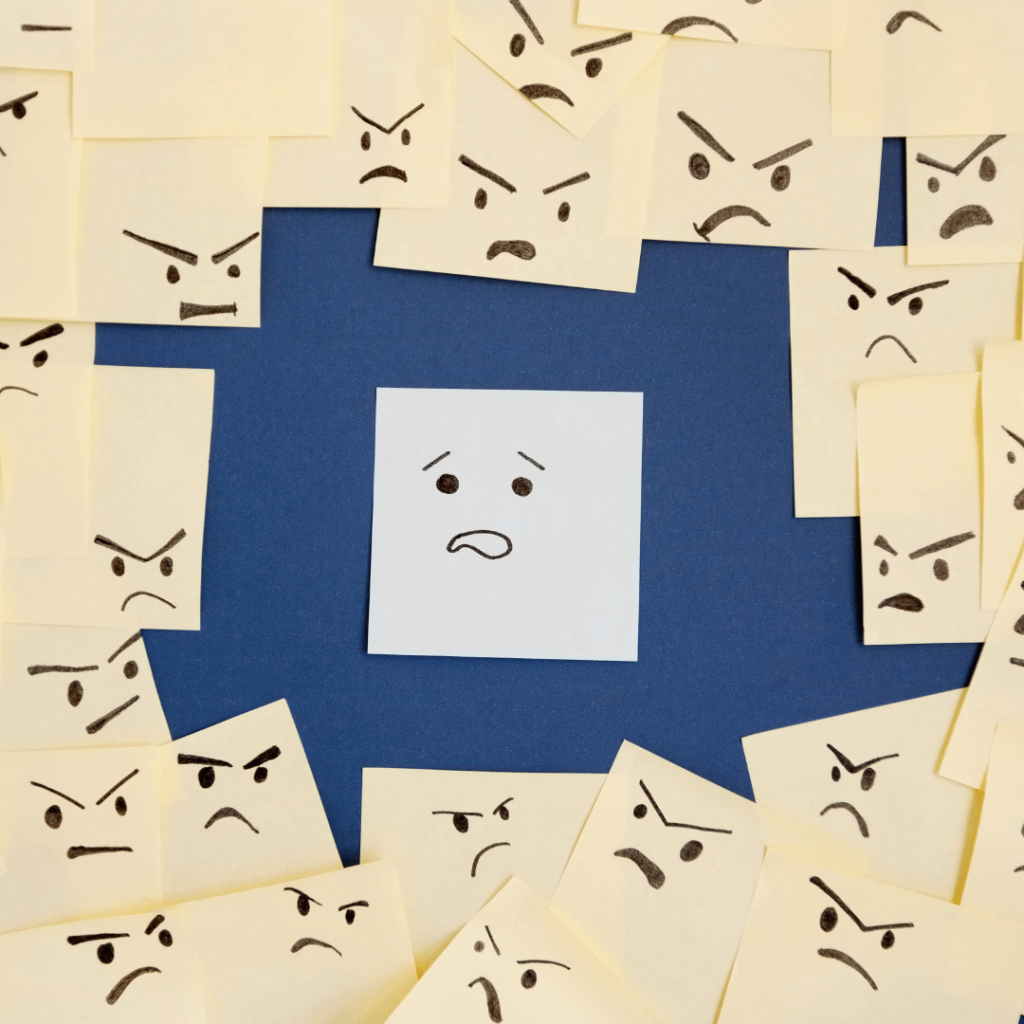 Every time we find someone has inadvertently used the PESO Model without credit to Spin Sucks, we have a process we follow.

If I know the person or someone at the company, I reach out personally and politely ask for credit and a link to the website.

If it’s not someone I know personally, one of my colleagues will do that.

In most cases—I’d say 95% of the time—it truly is inadvertent.

People believe that if it’s on the internet, it’s free to use.

Of course, that’s not the case at all.

You can’t use someone’s likeness or photos or logos without permission or often without paying for it.

And yet, it happens all the time.

But when you point it out, almost everyone is gracious and will fix it immediately.

Then there are the 5% who are, well, complete jerks about it.

These are the people who blame the intern.

In fact, when someone tells me it was the intern’s fault, I know I have a fight ahead of me and will likely have to bring the attorney in to help.

Because those people are always full of it and they’re not going to admit wrongdoing, no matter how much documentation you show that proves you own the copyright and trademarks.

When companies post tweets that should have stayed in drafts, there’s always someone who says, “Fire the intern who posted this.”

And when an email is accidentally sent with “Dear First Name” embedded, the same cry rallies across the web.

I don’t know about you, but I was definitely an intern at one time in my life.

And I made some mistakes.

But I’ve also made mistakes as a professional with many years of experience and expertise unique to me and my agency.

None of those mistakes are the fault of the intern.

A few years ago, my family and I were in the Outer Banks vacationing.

I had shipped my bike out there and was hitting the road every morning to soak up some rays and get my training rides in.

About halfway into our vacation, I was out on the road and I stopped to take some photos.

Because that pretty much never happened, I called her immediately.

As it turns out, the emails I had set up to go out while I was gone about our new online course hadn’t been finished.

Oh, I managed to send them out, but I never finished the copy for any of them.

And people were responding to the emails and filling up my team’s inboxes.

I had to turn around immediately and write and send a mea culpa.

I didn’t blame the intern.

That got a few laughs and some good, old-fashioned ribbing—and it took a while for my blood pressure to return to normal (paddleboarding in the ocean helped with that), but now it’s a funny story to tell.

When Hurricane Ida hit Louisiana last week, The Today Show covered it (of course) and the story was accompanied by a graphic that said:

Yes, it really aired with “some other stat” as the third bullet. Which means someone screwed up, but do we really think it was the intern? But the internet got out their pitchforks and starting chanting, “Fire the intern! Fire the intern!” 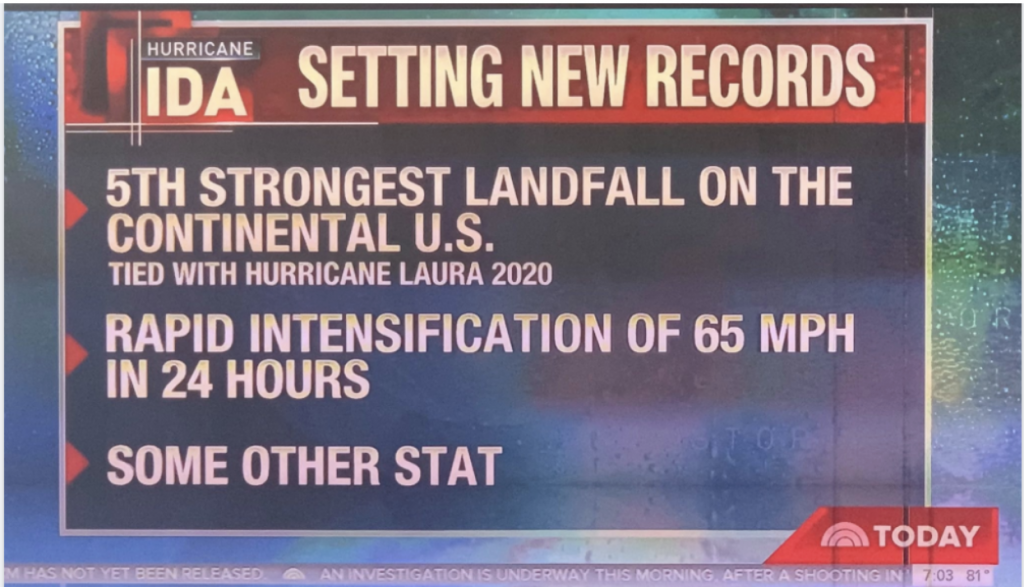 Blame the Intern: The HBO Edition

In June, HBO Max (or Hobo Max, as my small one calls it) accidentally sent a blank email to its subscribers.

I received it and chuckled to myself and then deleted it.

They took to Twitter to apologize and claimed the intern accidentally sent it out.

Their tweet said, “We mistakenly sent out an empty test email to a portion of our HBO Max mailing list this evening. We apologize for the inconvenience, and as the jokes pile in, yes, it was the intern. No, really. And we’re helping them through it.” They concluded their tweet with a heart emoji.

We mistakenly sent out an empty test email to a portion of our HBO Max mailing list this evening. We apologize for the inconvenience, and as the jokes pile in, yes, it was the intern. No, really. And we’re helping them through it. ❤️

The point is, mistakes happen.

We ALL make them.

According to my kid, I make mistakes multiple times a day—and I’m constantly wrong (I really thought I had until the teenaged years before this happened).

Even if the mistake were the intern’s fault, blaming them doesn’t help matters in the least.

It makes you look like a weak leader and it hurts morale and breaks down culture.

Sure, HBO took a funny approach, but it still makes them look weak.

I feel sorry for their interns.

We all need leaders who will stand up for us.

A few years ago, former White House intern Monica Lewinsky mocked Sen. Marco Rubio on Twitter after he criticized an intern for writing a Politico article stating that he was “walking back” his comments on the GOP tax law.

And I suppose that’s when blaming the intern became a thing—when the President of the United States blamed the intern for his affair. 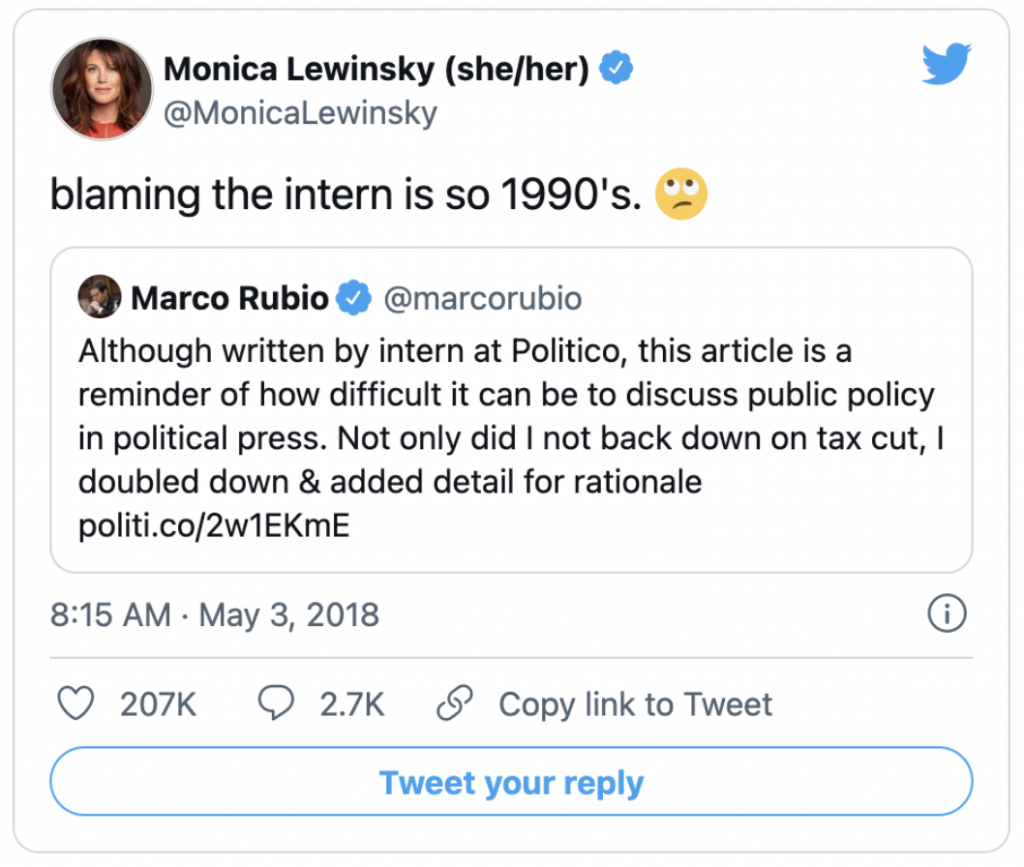 When HBO blamed the intern for the test email that was sent to subscribers, the internet came to their rescue.

Because there is no reason on earth an intern should have the keys to ever hit send on anything that goes out publicly.

That’s why there are approval measures in just about every piece of software available today.

Our interns can’t do anything more than upload copy to any of our publishing platforms.

There are at least two levels of review and safeguards to prevent mistakes from happening.

That’s also why the mistakes that happen on our end are almost always because of me or our senior leadership team—we don’t have those levels of review and safeguards in place.

So you can bet, if there is a major mistake, I likely either did it myself or approved it.

Here’s the thing: when anyone blames the intern, it says more about them than it does about the intern.

Even if the intern (or, really, anyone else on my team) made a mistake, I would cover for them publicly and use it as a learning opportunity for them internally.

Interns and young professionals are on your team to learn, soak in as much as they can, and learn different parts of the job so they can make an informed decision about the career they’ve chosen and what kind of work they want to do for the rest of their working lives.

The next time the intern is blamed, remember what it was like to be in their shoes and come to their defense!

And the next time someone blames the intern for the PESO Model theft, I will send them a link to this article.

If you want a good laugh and to reminisce about all of the mistakes you made as an intern, go to Twitter and search for #dearintern.

It’ll take you down a fun rabbit hole.

And if you’d like to share that rabbit hole with us and you’re not already a member of the free Spin Sucks Community, get your butt over there!