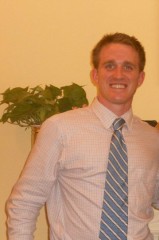 A couple of years ago, Mr. D was doing some consulting work for Congressman Brad Schneider.

He came home one day and said, “There is someone you need to meet.”

Apparently Matt Cermak, who was doing finance and communications (what a combination!), was (is?) a big fan of Spin Sucks.

Super flattered, I asked him to make the introduction and Matt and I became fast friends.

He grew up in Chicago, not far from where we currently live in Wrigleyville. His grandparents owned a very popular restaurant that his mom ran while they were kids.

They lived upstairs from the restaurant and, literally, grew up in the family business.

He went on to college on a golf scholarship (look out Tiger Woods!) at Missouri State University and played all through school. I’ve never seen him play, but from what I understand from mutual friends, he’s really good. Which also means he’ll never get me out on the golf course. Wouldn’t want to embarrass myself.

During one of our first dinners, we discovered our mutual love of Fernando’s (our favorite Mexican restaurant), which was just another thing to seal our friendship.

In fact, we all had dinner there one night a few months ago and all of the staff remembered he and his brothers as the little boys who golfed.

Today Matt is an account coordinator at Fusion92, a digital marketing agency in Chicago, and splits his time between the Chicago and Arlington Heights, Ill., offices.

The thing that strikes me the most about Matt is his curiosity and his consistent quest for knowledge. He isn’t afraid to ask questions or to hear advice. He’s very smart and very willing to learn about life from his elders (cough, me, cough).

He’s often here in the comments, particularly on Fridays, so give him a big, crazies welcome.