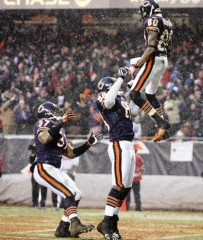 As we have established in a previous post, I am a (cough) HUGE college football fan.

So when Lindsay Bell asked me if I’d like to be a guest blogger, well, my mind went directly to football and communications.

I’m hoping many of you have seen the comedy/football movie, “The Replacements,” but if not, it’s about professional football players going on strike, and how the ragtag team of replacements accomplished more than just wins.

During one of the final scenes, Shane Falco, the quarterback played by Keanu Reeves, has to motivate the offense.

Let’s take a look at how this quote fits communications as well, shall we?

Even with all the focus on injuries and how to prevent them – at all levels of the game – players still get hurt. And they fight through pain to keep playing. Maybe some do it for their own pride, but I’d wager they are also pushing through for the team. Each player wants the team to succeed.

While many would agree that being a communicator isn’t physically dangerous (although I think banging one’s head against a wall qualifies), there are many times we have to suffer through the pain of annoying clients, customers, and sometimes leadership who, while not knowing anything about communications, believe they know best.  That’s when we have to play with the pain and help the team succeed.

I don’t personally agree with this at face value, (but maybe Gini Dietrich does after her recent bike wreck), so let’s view it from a “communicators have scars and carry them as badges of honor” standpoint.

Think about it. How many horror stories do you have since you began your career? Our “scars” equal our experience. We’ve licked those wounds and now showcase them over drinks with each other or use them as a barometer for clients and audiences. I mean, doesn’t your elbow ache when a client wants to tweet without knowing why?

That one play. That one win. That gamble that paid off. That game strategy. Clemson alumni will always love Coach Danny Ford for taking the Tigers to that 1981 National Championship win.

Fans of the Chicago Bears will always remember “Sweetness” as well as “The Fridge” scoring a touchdown to help them win Super Bowl XX.

“The Catch,” as the winning touchdown reception by Dwight Clark off a Joe Montana pass in the 1982 NFC Championship Game, is still revered by ESPN commentators. History is full of glorious moments.

As a communicator, don’t you have a few projects that you continue to proudly reference?

You know what I mean. You take on a dreamy look as you recount the pieces that led to success: Teamwork, putting together both short- and long-term strategies, being creative, thoughtful, a listener, an educator, and an advisor. You are the coach, quarterback, offense, defense, and sometimes even the kicker.

The goal, though, is to be able to move quickly and change the play unexpectedly if the need arises, even if you have already snapped the ball. This is critical for launching a new product, working with client wishes and objectives, or engaging with the media. Communicators have to handle immediate concerns as well as look three years ahead. That’s how we become the “go-to” player.

You don’t start out looking for glory, but sometimes, it finds you.

CEO of E. Marketing Communications, Susan Cellura is a dynamic marketing communications professional with over 20 years of experience. She is an enthusiastic team-builder, with a progressive history of success in designing and implementing communications programs for global organizations. A strategic thinker with the ability to understand the needs of multiple audiences and deliver solutions, Susan is a results-oriented problem-solver with exceptional interpersonal and negotiation abilities. On a personal note, she currently resides in Texas, is married with a daughter, a dog and a new kitten. She loves college football, especially her Clemson Tigers, and enjoys the beach, reading, spending time with friends and family, wine and eating!

View all posts by Susan Cellura