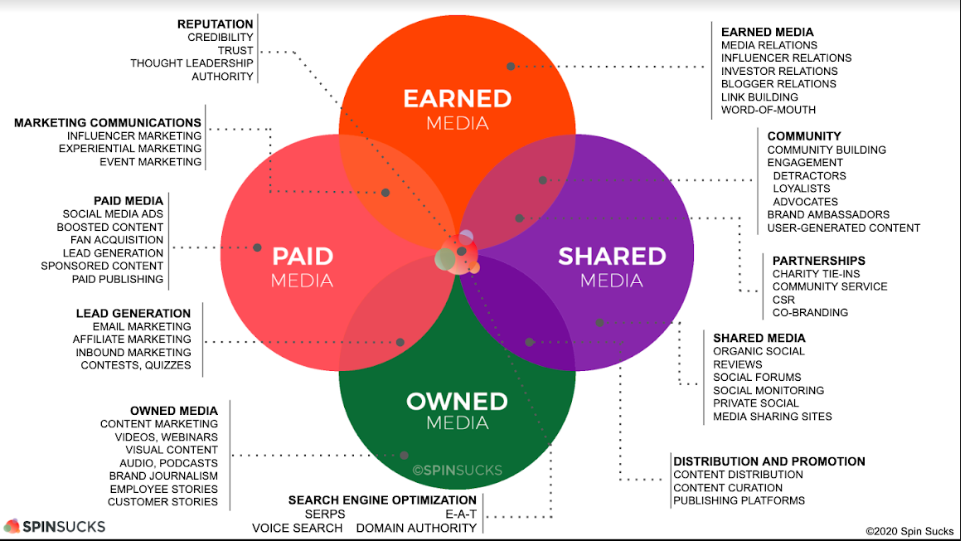 It’s been a wild couple of weeks over here at Spin Sucks.

Being a predominantly internet-based company, the world of online courses is one I’m extremely familiar with.

I’ve promoted them, taken them, created them, studied them, and studied other business models to figure out what we could adapt in my own business.

As we were updating the PESO model graphic and process for the new decade, we knew it had to come with robust training.

The best way to stop that from happening—or at least the best way to delegitimize it—was to create an official, academic track that professionals, students, organizations, and universities can learn from and trust as a credential.

Today, I want to talk a little bit more about both of those things—the new and improved PESO model graphic and process, and the official certification that is now available.

A Major Overhaul of the PESO Model

If you’ve been on a social media, email, and blog fast for the last couple of weeks, you probably don’t know that we’ve revealed the new and improved PESO model graphic and process AND opened registration for an academically-accredited PESO Model Certification.

We’re going to focus today on the changes to the model.

Because that’s all we’ll have time for today, you can find the certification information here on Thursday.

You can find a copy of the new graphic here. you may want to open it to follow along.

For starters, we updated the tactics listed under each media type.

Things such as Google+ and Vine were still listed under shared media.

It was created eight years ago, so it was definitely time for a refresh!

We updated the tactics, of course, but more so, we upgraded it so it’s focused on strategy and not so much on tactics.

The tactics are still there, but we took what we’ve learned in the last eight years in implementing this for clients—and teaching it to communicators—and evolved it.

Email marketing between paid and owned.

Reputation still lives in the middle, but we’ve updated what that looks like when you strategically use an integrated PESO model.

The Secret to PESO Model Success

The most important thing to remember is that the PESO model is like a pyramid with four corners.

You need to have each corner built solidly, or the whole thing will collapse.

The thing most people get wrong when they say they implement a PESO model program is they use only one or two of the media types.

And the program collapses.

That’s not the fault of the process—or model.

It’s because a house was built with only half a foundation.

Before we begin though, I want to be very clear about something.

I do not think a PESO model program should begin with paid media.

There may be some exceptions to the rule, but you generally want to begin with owned and then move to earned or shared and then add in paid.

Eric Schwartzman wrote an excellent article for Spin Sucks on the topic.

If you haven’t already read it, I recommend you do.

While it frames the PESO model for a start-up, I would argue anyone beginning a PESO model would execute it the same way.

The gist of it is you start with owned, then add shared, then earned, and then paid.

The only difference is I can see how some organizations might reverse shared and earned, but owned is where you start and paid is where you end.

However, if we had created the OSEP or OESP model, I guarantee it wouldn’t have taken off like it has.

Both of those are harder to remember than PESO.

OK! Now that I have that off my chest. We’ll start with paid to discuss the changes to the graphic and the model.

We’ve added a lot to the paid element of the model—we’ve learned A LOT about this media type in the last eight years.

I freaking love it!

You get minute-by-minute data and can make smart decisions about what and how to adjust on the fly.

At its core, paid media is still about paying for things such as traffic, leads, fans, and sponsorships.

It also includes paying for things such as software, which is why you’ll see things such as email marketing intersecting there between owned and paid—you have to pay for the software to distribute your owned media.

We’ve expanded it to include marketing communications (such as influencer and event marketing) as it intersects with earned media, and we broke out lead generation into its own subcategory that intersects with owned media.

While communicators aren’t typically responsible for lead generation and sales, research shows over and over again that CEOs expect the work we do to be directly correlated to sales.

We’ve found that in our work, as well.

Our clients don’t just want us to tie our work directly to sales, they require it.

Therefore, we evolved both the PESO model graphic and process to include lead generation and sales.

For sure, you’re still building brand awareness and credibility and reputation.

Now you can tie those efforts directly to sales.

The biggest change in the earned category is we’re not calling it “publicity” anymore.

Nor is it just media relations.

So much of what I’ll call “on-page SEO” is reliant on earned media—journalists, bloggers, investors, influencers, and other important stakeholders.

As part of that category, we’ve added link building, which lends itself to search engine optimization.

Another new category is the community.

We’ve talked about the importance of community many, many times over the years, and not just because we have the best one for communicators on the entire web (ahem).

You can’t buy one—you can’t magic one up by wishing for it really hard.

When you earn it by integrating it with shared media, it supercharges everything else you do.

After earned media comes shared media, which now has evolved from straight social media to include reviews, forums, and organic engagement.

We’ve also added distribution and promotion—how you take the content you’ve created and produced and disseminate it through shared media.

It was important to add in that distinction because, as I’m sure you have experienced, you can no longer reach your fans and followers by organic reach alone.

And while we used to be able to create community by drumming up conversation, today we need to use content.

So distribution and promotion were included with this refresh.

We’ve also added partnerships at the intersection of shared and earned.

We know that millennials are more interested in working with organizations that have strong community ties and give a portion of sales to charity.

One of my favorite brands is Thrive Causemetics.

Their mascara is to die for, AND they donate a tube of mascara to someone in need with every purchase.

I have killer eyelashes and so does someone in need.

In the words of Charlie Sheen, “Winning!”

Last, but most certainly not least, as we established at the start, is owned media.

This is the content you produce for something you own—it has to live on your website or blog (or both).

While we have lots of options today for content creation on other parts of the web, such as LinkedIn Pulse and Medium, that’s not considered owned because, if those sites go away, so does your content.

For content to live in owned media, it has to live on something you own, control, and decide the demise of without the participation of the social networks or another organization.

In the past eight years since the first PESO model was created, our content options have evolved.

Today, we have multi-media, such as podcasts and videos.

This helps because the majority of human beings are visual learners, which means they prefer video.

But there are also auditory learners and people like me who have to read to learn.

You can now create content for every learning style.

And, at the intersection of owned and paid, you have affiliates, brand ambassadors, sponsored content, and native advertising.

This is content you create, but that, in one way or another, you pay to have placed.

Many of you will never touch affiliate marketing—and that’s OK!

It scares me a little bit.

I don’t like the idea of exhausting our subscribers for the sake of someone else’s product.

But I also have friends who make seven figures doing that.

Which is great for them, and probably something I should get over, but I’m far too protective of you.

For the rest of the world, though, affiliate marketing is something to consider if you have a product that needs to reach mass numbers of people.

This is all credible because it’s content; you’ve simply paid to get it in front of new audiences.

The Addition of SEO at the Center

I mentioned at the start that we added search engine optimization with this refresh.

We did this for two reasons:

The refresh takes into account what we can do tactically, for sure, but the biggest change is how we approach a communications program strategically that will allow us to answer the CEO when they ask us to make a direct tie between our work and sales.

To learn how to do this, check back here on Thursday.

In the meantime, what questions do you have about the new graphic and process?