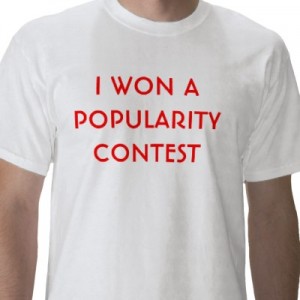 Last summer, I spoke at the Vocus Users Conference, where I got to meet Valeria Maltoni, Steve Farnsworth, and Adam Singer in person for the first time.

At the time, Adam was working for Lewis PR and we had a good time sharing agency stories (along with a crazy meal that Steve found on Yelp, which turned out to be not nearly as good as the reviews indicated).

Shortly after, Adam left Lewis to join the Google team and I was very excited to have a personal connection there who could answer all my questions about analytics.

What I’m about to tell you is the very reason I’m happy he’s working at Google.

He created an analytics dashboard that will help you figure your most popular blog posts for any time period…and it gave me the idea for today’s blog post.

Following are the Spin Sucks most popular blog posts of 2012 (at least through December 20), according to you, our dear readers (cough, crazies, cough).

So there you have it! The most popular posts of the year. I have a new goal for 2013: Get more than six posts in the top 10.
Tweet
Share
Share
Pin