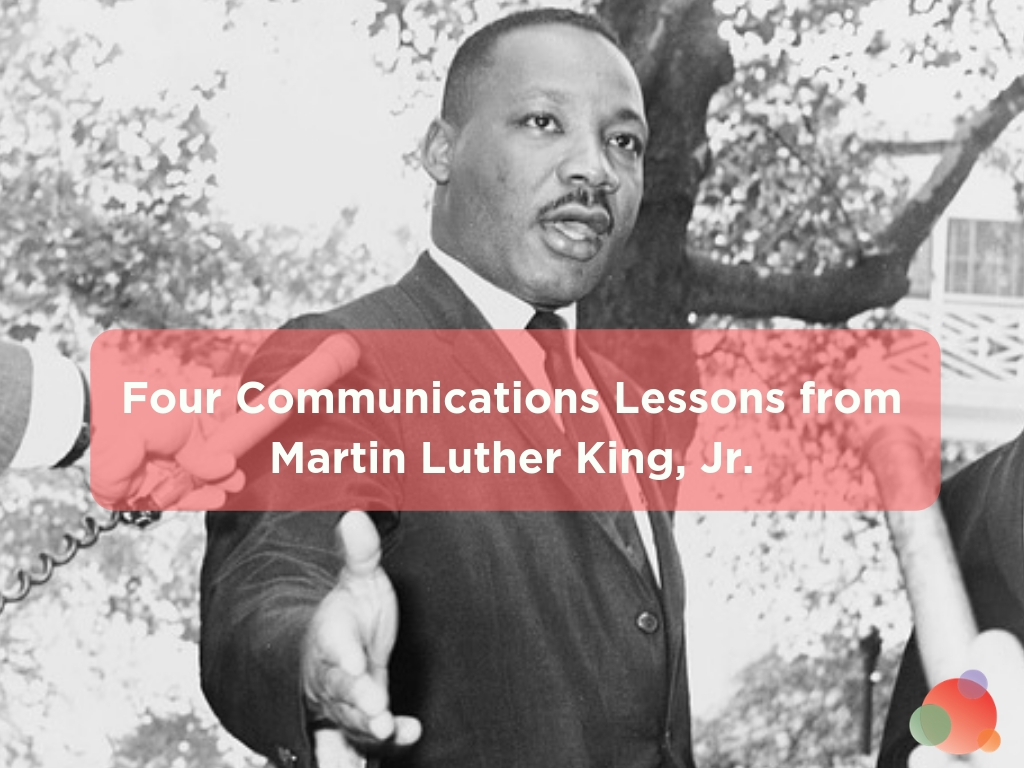 Gazillions of people have written Martin Luther King, Jr. communications lessons posts in the past, and a gazillion more will in the future.

However, I’m willing to take that on because there is no doubt Martin Luther King, Jr. is one of the great communicators of our time. And honestly, every year I write a post on MLK Day, which is NOT a tribute post to him, I feel horrible.

Like here I am, a professional communicator, writing a post on a communications blog, on MLK Day, and completely ignoring the fact the change he created in our country is directly related to his absolutely exceptional communication skills.

Plus I already started this cliche trend when I wrote a similar post about communications lessons from Abe Lincoln.

What can I say, I love history and I love awesome historical leaders that rocked the house when it came to communications.

All leaders can teach us something about communications. Some good, some bad.

MLK, Jr.’s mastery and application of the English language to motivate action is one of the best we’ve seen and will ever see.

One could list an endless line-up of communications lessons: techniques, modalities, and strategies employed by Martin Luther King, Jr. which made him a powerful communicator. If I could nail it down to one overarching theme it comes down to respect.

One trend you’ll notice in all great writers and communicators is they all possess an academically exceptional mastery of language as a tool.

For some this is properly learned, for others, it’s more self-taught.

But they all carry both a deep respect and understanding of the rules and devices which make up language.

Long story short: your English teacher was right, this stuff IS important.

In a world where basic rules of grammar, proper use of words, and sentence structure is often passed off as unnecessary, King offers a very strong reminder these communications lessons are eternal and powerful.

Repetition (anaphora…yeah, I didn’t remember that’s what it is officially called either), metaphors, alliteration, allusion, hyperbole, rhetoric….. the “I Have a Dream Speech” alone is a basic English class.

A few articles which break this down far better than I ever could:

Martin Luther King, Jr., Rhetorically Speaking in the Oxford Dictionary blog (which is one of my new favorite blogs….because I want to know the origin of ALLLL the words and phrases. I can lose years of my life on this blog.)

And this one from the BBC.

Never Underestimate The Power of Words

MLK never did was underestimate the power of targeted, specific word choice.

If you take only one communications lesson away from him, let it be this.

I feel very lucky because I have had the opportunity to work in two industries where very specific word choice was mandatory: politics and animal advocacy.

One wrong word, even in the right message would create such a ripple of chaos you learned quickly to analyze your words and the consequences of each one in excruciating detail.

What I learned from this is most people, even veteran and skilled professional communicators, are pretty darn lazy when it comes to word choice. And that’s because it takes a lot of energy and understanding about the goal of your message AND the audience you are communicating to in order to get word choice right.

Martin Luther King, Jr. fully understood the power of words and he used that power to support his mission.

He chose words based on the following elements:

So how do you start to appreciate word choice more? I’ll talk about THAT next week (ooooohhh cliff hanger).

Here is a fascinating speech from one of MLK’s speechwriters about the making of the “I Have a Dream” speech.

Speaking of words….. Positive ones are powerful.

One thing that defined MLK from many other civil rights voices around the same time is his focus on positive messaging and images.

While he didn’t ignore the pain, suffering, and negative current situations, he focused on the “dream.”

He created a very vivid picture of how life could be, vs. how it was.

By doing so he inspired action vs. paralyzing people in fear.

I’ve written about this phenomena before when describing reverse messaging strategy and how to use it to drive consumer action. While “fear tactics” can accomplish certain goals, positive messaging is much more effective to motivate action.

Single Focus in Each Communication

He picked a single focus, whether it be a message or goal, for each communication and then told a story to support that focus.

Every part of the speech or communication spoke directly to that focus. He didn’t add multiple messages or calls to action. Not did he over complicate. His goal for each communication and stayed specific, simple, and focused to accomplish it.

No post about Martin Luther King, Jr would be complete without some of his most powerful quotes (all which serve as examples of the communications lessons outlined above.

Here are some of my favorites, please add your own in the comments.

“No one really knows why they are alive until they know what they’d die for.”

“No person has the right to rain on your dreams.”

“Faith is taking the first step even when you can’t see the whole staircase.”

“Only in the darkness can you see the stars.”

“We must build dikes of courage to hold back the flood of fear.”

“We must accept finite disappointment but never lose infinite hope.”

“There comes a time when silence is betrayal.”

“Our lives begin to end the day we become silent about things that matter.”

“In the end, we will remember not the words of our enemies, but the silence of our friends.”

“Nothing in the world is more dangerous than sincere ignorance and conscientious stupidity.”